In the 1930s, the Rosendale Township Association was looking for ways to attract more tourists to Rosendale. So, they decided to approach a Brooklyn Based telemark skiing club with a project to build a 40m ski jumping slope. After receiving a lease from Joppenbergh’s owner, Warren Sammons, construction began and Rosendale’s first-ever Ski jump competition was scheduled for January 1937. Unfortunately, bad weather ensued and competitive events were canceled.

Refusing to wait until the next winter, the slope was covered with mats, carpets, straw, pine needles, and borax which created a makeshift summer competition drawing a crowd of 3,300 people. That year, Olympic skier Ottar Satre set a record jump of 112ft. Winter competitions continued until 1941 when competitions stopped due to World War II.

In 1961, the Rosendale Nordic ski club created the Joppenbergh Mountain Corporations (JMC) to manage the property. After buying the land from Mary Sammons, new improvements to the ski jump were made including a 230 ft. slope in 1965 with a snowmaking system for artificial snow.

In 1970, the Rosendale Outing Ski club and the Rosendale Nordic ski club merged and planned the final ski jump competition on February 6 and 7, 1971. During this competition, Hugh Barber, a Middlebury college student, broke records jumping 213 and 217ft.

Although the ski jump was a success, it did not come without its downfalls. Over the years, a number of jumpers were taken to the hospital due to the landing area being too short. When ski jumping, there is typically a hill towards the end where jumpers are able to slow down after landing their jump; however, jumpers began landing on this end hill causing them to get injured. The ski jump was also financially difficult. Money had to be put into making artificial snow, keeping the ramp smooth and tightly packed, and keeping the ponds filled and lined. Competitions were frequently canceled due to lack of snow, and lastly, Bear mountain ski jumping increased in popularity drawing away business from Joppenbergh. 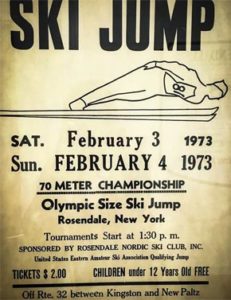 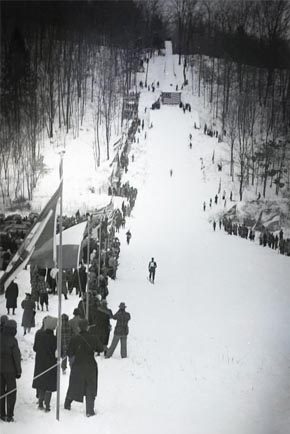 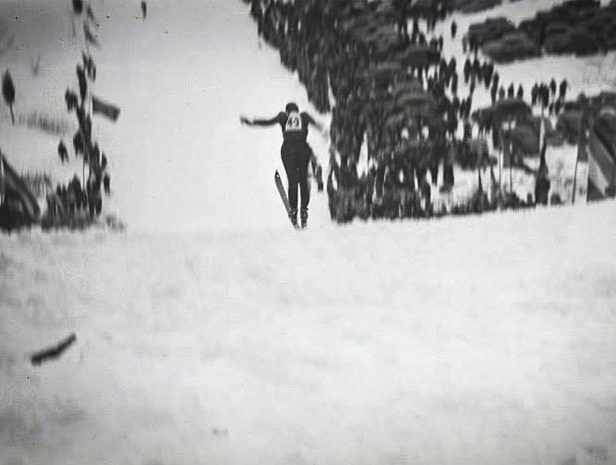