Last winter, Jeffery Benjamin, a Ph.D. candidate from Columbia University, brought us a box of wood samples from an old house near the Wallkill Valley Rail Trail between Rosendale and Kingston. The house was demolished in 2017 and shortly after, Jeff collected the samples and asked us if we could use them to determine the year of construction. The salvaged wood came primarily from the frame, rafters, floors, and stairs. Upon initial inspection, we determined that the wood was mostly Eastern Hemlock (Tsuga canadensis) and some Spruce (Picea).

The trees appeared to be from an old-growth closed-canopy environment because they had a dense ring structure and were most likely locally sourced for the construction of the house. To determine the age, we would need to measure the rings and statistically compare the results with measurements of rings from the same species that grew under similar conditions. In order to do this, we counted and measured tree rings from the Eastern Hemlock samples, as well as a stand of living Hemlocks two miles east on a Wallkill Valley Land Trust property easement. Each individual house sample was numbered by Jeff and we designated the site “K02.” The Hemlock stand was designated as site “K03” and each individual tree was assigned a letter. 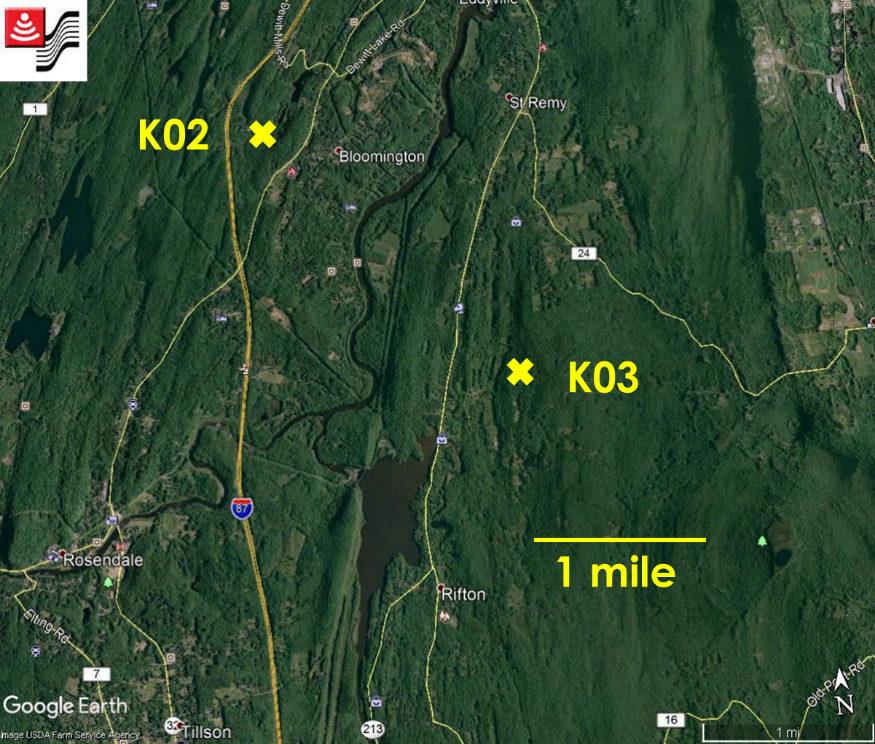 Figure 1. Site K02 is the former location of the house, just a few hundred yards from the rail trail.  Site K03 is the location of the stand of Eastern Hemlocks on a WVLT easement property.

The living Eastern Hemlock samples were collected using 5.15-mm-diameter increment borers (Figs. 2&3). We collected two samples per tree at 90-degrees apart. For these samples we focused on those with the most rings to fulfill our statistical procedures requirement, which was a minimum of 50 consecutive rings. The samples were then mounted on wood blocks, sanded down, and their rings were counted and measured. The ages of these trees were easily determined by counting back from Summer 2019 (when the samples were taken). The oldest living tree (K03H) dated back to 1875 (Fig. 4). 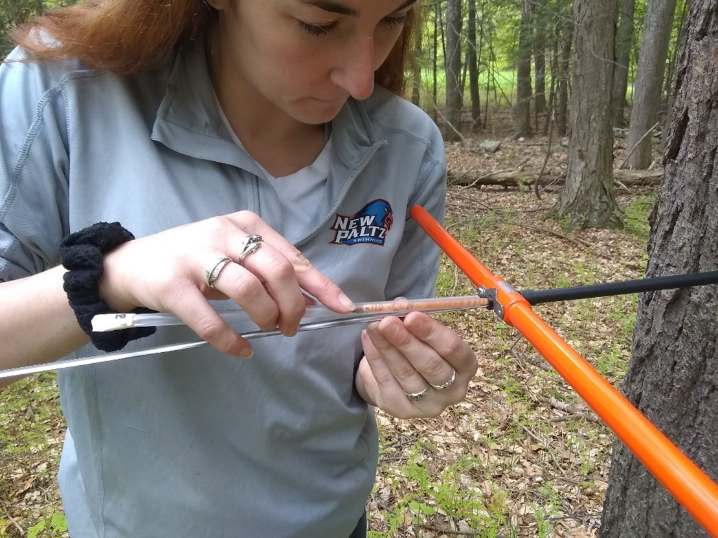 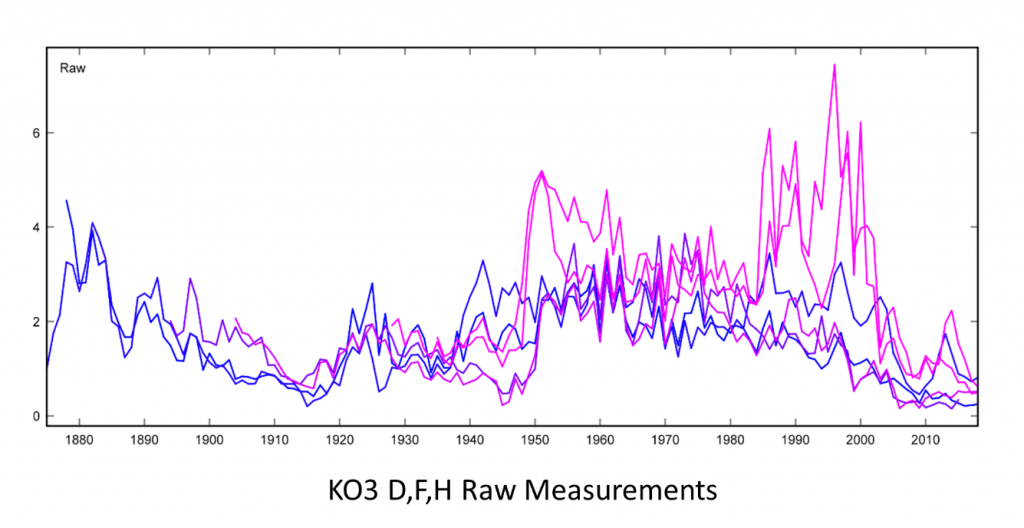 While some of the wood samples from the house had been weakened by rot or worms, most were in excellent condition (Fig. 5). We selected 15 of these samples based on condition and a minimum ring count of 50 for our measurements. Three of these samples were determined to be Spruce and the rest were Eastern Hemlock. The longest living sample from the house (K0207B) was Hemlock and had 174 complete rings. Four other samples (K0206, K0208, K0212, K0220) also had more than 100 complete rings. We measured individual ring widths from all 15 samples with a precision of 0.001 mm under 20X magnification. Ring widths in trees can vary from year to year due to both internal and external factors.

One internal factor is the relative age of the tree, since a very young tree often grows more quickly than average and a very old tree more slowly than average. External factors can be things like changes in access to sunlight (canopy cover), access to water (changes in precipitation or soil moisture), changes in the growing season (number of days above or below an optimal temperature range), or changes in foliage due to fire, disease, or infestation.  Different tree species may be more sensitive to some of these factors than others, so using ring-width measurements for most analyses is best done with data limited to one species. For this reason, we did not use our few Spruce samples for this investigation. 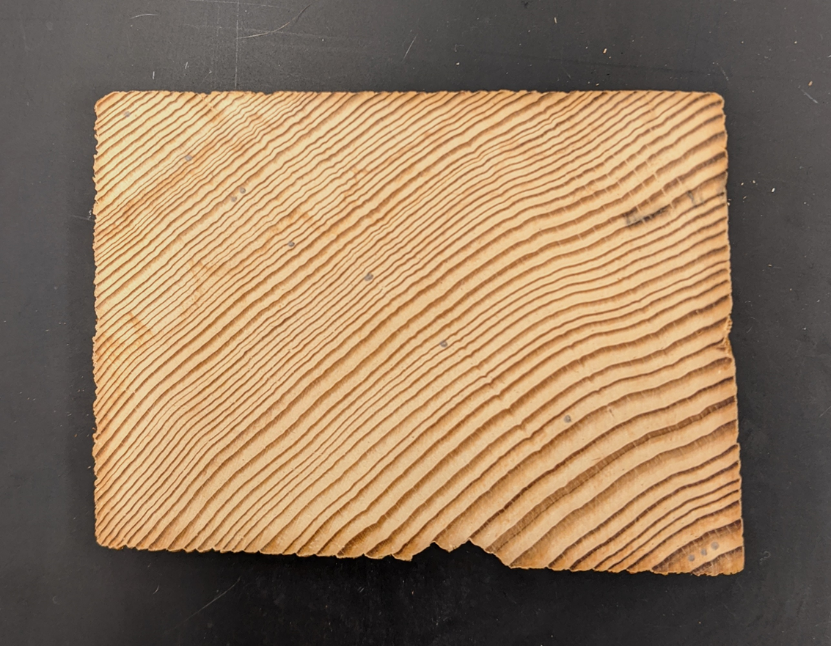 When we look at “raw” ring width measurements we can see both “long frequency” variation (slow sweeping changes over many years) and “short frequency” variation (more abrupt year to year changes). Our primary goal for this study was to date the house, and to do that we needed to match our measurements with Hemlock measurements of known age. The long frequency variation would be due to factors such as the relative age of an individual tree, slower (decadal – centennial-scale) rates of climate variability, or perhaps long cycles that affect canopy cover such as periodic logging or infestation. The short frequency variation would be due to factors such as changes in annual average rainfall (like a drought year), or temperature (such as a warm winter), or sudden impact (like a lightning strike).

Since we wanted to compare our trees with trees from another location, we needed to minimize the local or individual effects on the rings and accentuate the patterns that are more likely the result of regional factors like rainfall and temperature. To do this we first “smooth” the measurement curves to get rid of the long frequency local or individual tree effects. We do this using a “Spline” function (Fig. 6). Once we have done that it is much easier to match these “detrended” ring measurements between individual trees in our set and line them up relative to each other both visually and statistically (Fig. 7). 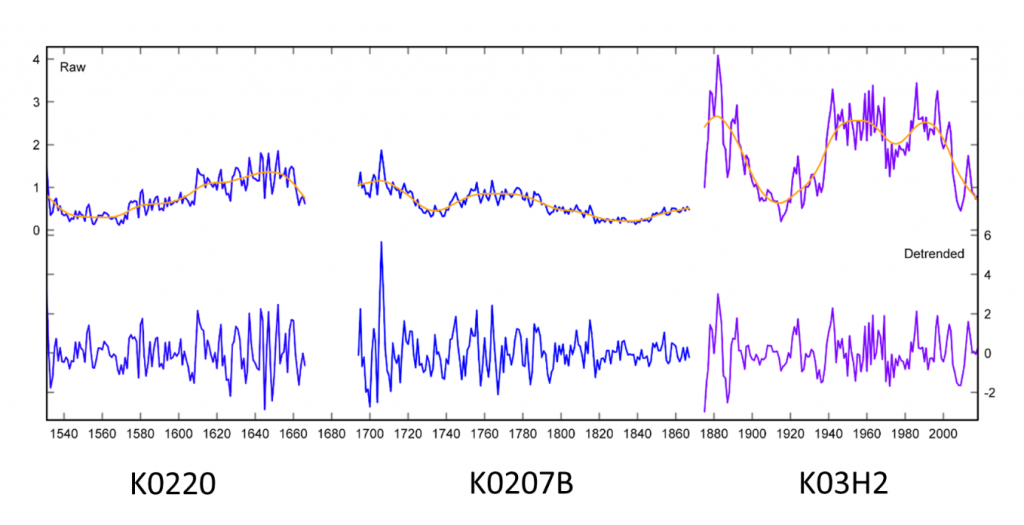 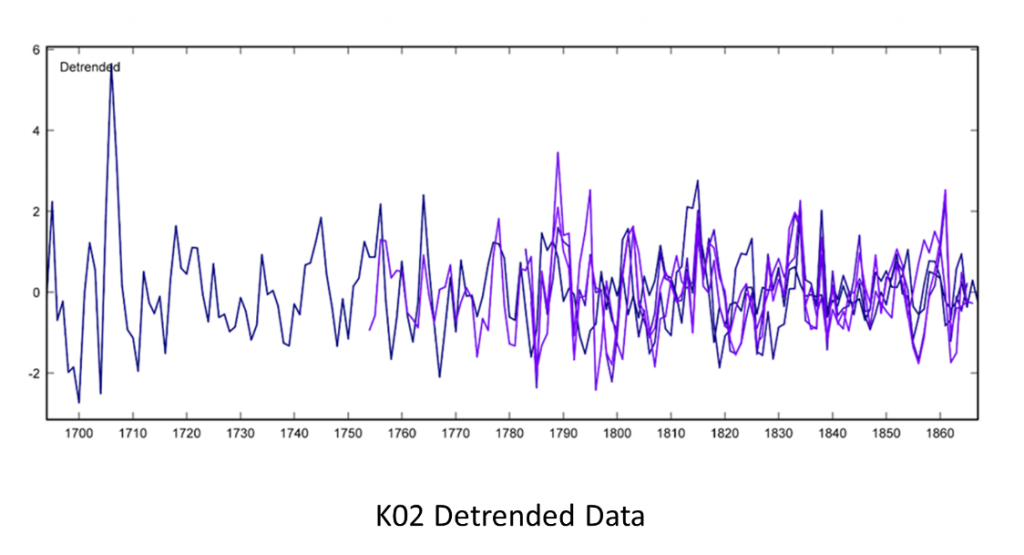 We can then average all the trees from a single location together to filter out any remaining and unwanted individual tree behavior. This will create a ring-width master key for the location. This same procedure has been done by other researchers on stands of trees from all over the world, so now we can search for the best master key to compare ours to and determine the actual years our trees lived. For this study, we chose a stand of Eastern Hemlocks on the Mohonk ridge collected and measured by Dr. Ed Cook from the Lamont Doherty Earth Observatory. His master key (ny012) spans the years 1511 to 1984 (Fig. 8). Statistical analysis gave us an excellent match between the two locations resulting in our being able to tell Jeff that five of the wood samples from the house had outer rings dating between 1865 and 1867.

It is probably therefore that the house was built shortly after Winter 1867, and none of the samples contained any wood grown in or after Spring 1868. One sample of Hemlock (K0220) may be significantly older with a youngest ring dating to 1666 (Fig. 6) and might have been reused from an older structure. As there is no apparent overlap between this sample and the rest of the wood from the house its significance is limited and we could not use it in the construction of our master data key. 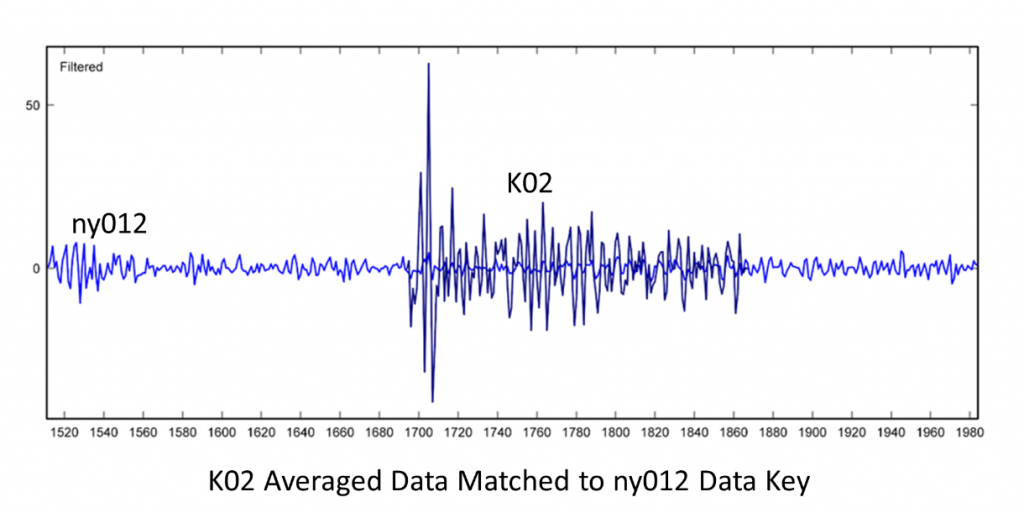 Figure 8. House samples average together and then statistically cross-matched with a data key created by Dr. Ed Cook from Eastern Hemlocks on the Mohonk ridge. The youngest tree-ring from the house samples works out to be from the year 1867.

Assuming our dating of sample K0220 is correct, we have created a nearly complete tree ring record from Fall 1530 to Spring 2019. There is a 28-year gap between K0220 and the rest of the K02 samples, and an 8-year gap between K02 and K03 samples (Fig. 6). If we now go back and look at the raw measurements, we can make several inferences about the local forest ecology (Figs. 6&9). The Spline smoothing function for sample K0207B suggests standard closed-canopy old-growth up until the 1730s when the trees begin to grow more rapidly. We note that several of the Hemlocks begin life in the 1750s – 1770s, so perhaps the canopy was opening due to early settlement logging in the area. The trees then demonstrated a normal growth pattern until the 1820s – 1840s when again there is an increased growth rate.

This corresponds roughly to the onset of industrialization such as the cement industry activity in the area and may again be the result of canopy opening due to increased logging. The living trees at site K03 show a significantly higher growth rate suggesting generally more favorable growing conditions at this location until about 1920 when their growth rates increased likely due to active land management (Figs. 4&6). Starting in 2003, however, the growth rate of the trees in this stand dropped dramatically. 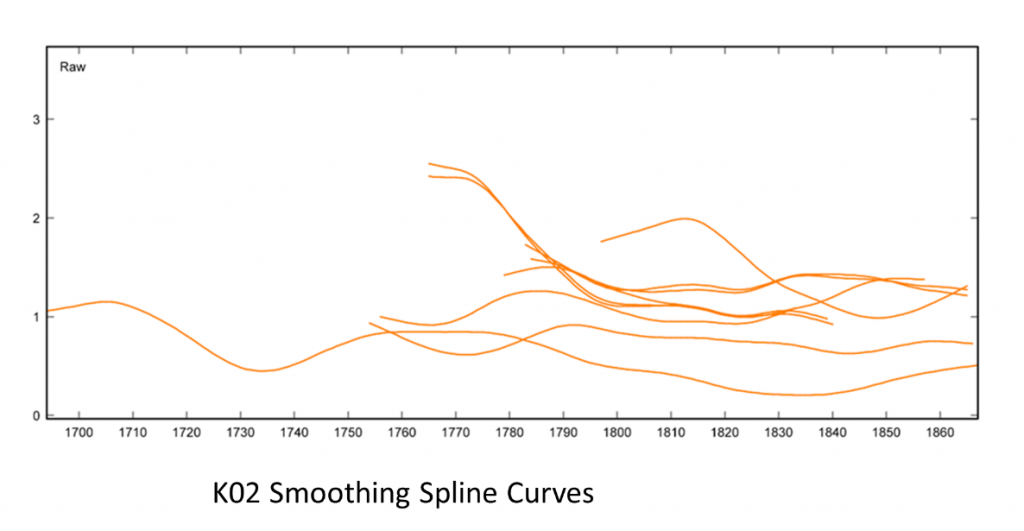 Around 2003, an infestation of an insect called the Hemlock Woolly Adelgid (HWA) resulted in the decline of the health of Hemlock trees at the site. The HWA is an invasive species native to East Asia, more specifically Japan. It feeds on the nutrients stored in the host plant’s tissue, sometimes injecting a toxin as well. As a result, the tree may lose needles and not produce new growth. Death of an affected tree usually occurs 4 to 10 years after infestation; trees that survive the HWA typically die from secondary causes due to its weakened state. The spread of the HWA to different regions in eastern North America is facilitated by a lack of natural predators. It is estimated (as of 2015) that 90 percent of the geographic range of eastern hemlock in North America has been affected by the infestation.

Various control methods are being enacted to combat the invasive populations of adelgids. On a forest level, two species of beetle have been released to feed on several species of adelgid: Sasajiscymnus tsugae and Laricobius nigrinus. S. tsugae is a black lady beetle which almost exclusively feeds on three known adelgid species, including HWA. It is also native to Japan and its lifecycle parallels that of the HWA. L. nigrinus is native to the western United States and Canada and is known to prey exclusively on various woolly adelgid species.

Regarding individual trees, environmentally friendly insecticidal soap and horticultural oil are sprayed on the foliage and smother the insects as they dry. Most trees require yearly treatment with this system. Toxic systemic insecticides which are applied to the tree’s foliage and bark can kill the adelgid for up to 4 years after application, but caution and restraint must be used around bodies of water.

All tree ring analysis was performed using the program ANTEVS