What is “on the menu” in March?

As part of an ongoing series of articles that examine native and invasive species found in our region, here we present the American Eels and Garlic Mustard

The American eel (Anguilla rostrata) is one of the most mysterious creatures on the planet. It begins its life in the Sargasso Sea in the Atlantic Ocean then makes it way into North American estuaries. In New York, these eels come up through the Hudson River and into its tributaries beginning in the early spring. 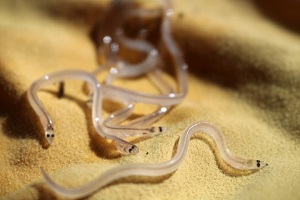 During the first year of their life, they are called “glass eels” because you can see through them. After the first year, their bodies darken in order to better hide among the rocks and vegetation in our tributaries. The adult is referred to as a silver eel and reaches sextual maturity anywhere between 5 to 25 years old. At this point it will travel back to the Sargasso Sea to spawn after spending their entire life in the North American estuary system.

American eels are vital to our ecosystem. Young eels serve as an important food source for many species including fish, mammals, and birds. Adult eels then become predators helping to control the populations of other species. Eels are also an important economic resource as they are a source of food for humans. They are specially in demand in European and Asian countries but you can find eels served in the U.S., most commonly at sushi restaurants.

Unfortunately, eel populations have been on the decline due to pressures such as overfishing, habitat loss, and water pollution. If you do decide to purchase eel for consumption, make sure it is ethically sourced eel and not from an over-fished area. Seafoodwatch.org is a great resource for information on sustainable seafood sources. 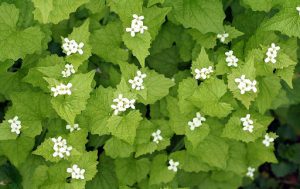 Garlic Mustard (Alliaria petiolata) is an invasive plant to New York along with other Eastern states and parts of Canada. Originally from Europe, garlic mustard was brought over to be used in medicine and food. Garlic mustard has become a threat to many native herb and grass species because it is allelopathic which means it releases a chemical that inhibits the growth and survival of other plants. This has led garlic mustard to take over the undergrowth’s of forests that were once full of diverse native plant species.

There are a number of methods to remove garlic mustard, but one great way is to eat them – and March is the best moth to forage for the delicate greens! They can be identified by their dark green leaves and scalloped edges. An easy way to tell if they are garlic mustard is to crush their leaves. Young plants will give off a garlic odor, but as they age the odor becomes less prevalent.

Between April and June, they also produce small white flowers with four petals. When removing the stalk be sure to pull it out by the roots to be sure a new plant doesn’t grow back. In addition to eradicating the invasive plant, eating garlic mustard has a number of beneficial health benefits as they are rich in vitamins and minerals. There are many recipes available on-line for garlic mustard, but the most common use is as a substitution for basil to make a garlic mustard pesto.

Check out http://nyis.info/invasive_species/garlic-mustard/ to find out more about how to identify and control a garlic mustard invasion.