Introduction to Eastern Box Turtle and Recipe Ideas for a Japanese Knotweed Quiche!

As part of an ongoing series of articles that examine native and invasive species found in our region, here we present the Eastern Box Turtle and Japanese Knotweed.

The Eastern Box Turtle (Terrapene carolina carolina) is native to Eastern United States and can be found in the Hudson Valley.

They can be identified by their high curved brown shell, with a covering of yellow or orange designs.  Individual shell patterns are unique, like a fingerprint, and can help you distinguish the same turtle from year to year.

Their bodies are very close to their shells; they are fused to the vertebrae. Box turtles can completely hide inside as protection from predators. The size of their shell can range from 4.5 to 6 inches long. Sometimes females have brown eyes while males have red eyes, although this is not always the case!

The Eastern Box Turtle is not a tortoise, but it spends much if its time on land. Their diet consists of fruits, mushrooms, grasses, worms, slugs, snails and other various animals and plants. Only during hot or dry days will they cool off in wetlands and shallow pools.

Eastern Box Turtles stay close to where they are born, only venturing out about 250 yards but have been documented traveling in a mile radius. They cannot survive in unfamiliar environments, making it vitally important for them to be left alone when you find them, and not moved to a new location. 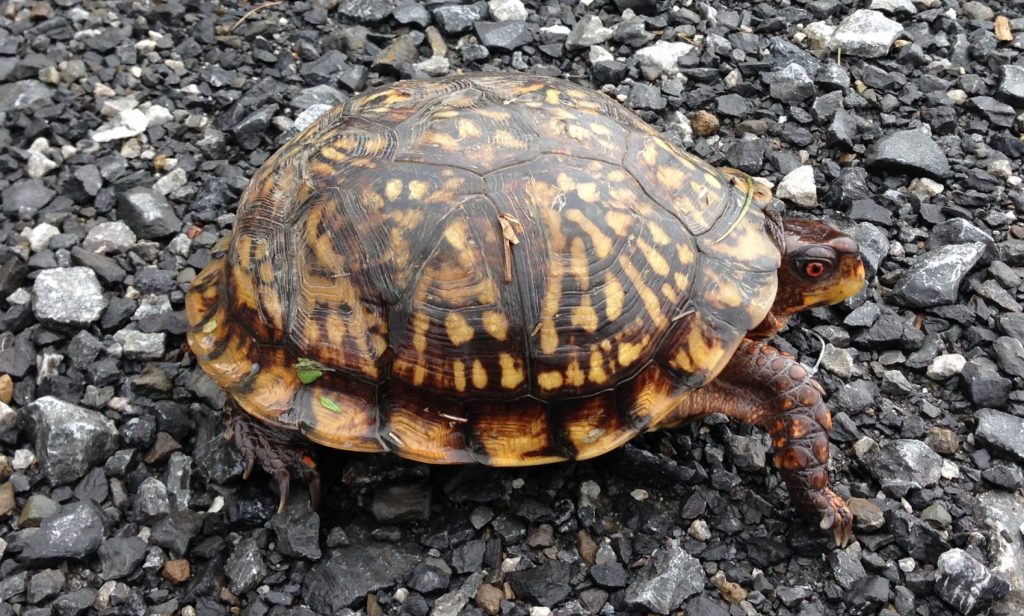 THE TURTLE WHO CROSSES THE ROAD:

If you find a turtle of any kind crossing the road, help it across if you feel safe to do so in the direction the turtle is heading. Make sure you wash your hands and do not pick up any animal unless you feel safe to do so. This is especially important with Snapping Turtles which can turn their heads and bite. A large stick can help motivate a turtle, and your personal safety is the most important.

In addition to natural threats such as predators, the Eastern Box Turtle is also susceptible to human caused hazards such as habitat fragmentation, vehicles, agricultural machines like mowers, and habitat loss.

Currently in New York State, there is special concern for the Eastern Box Turtle. The Wallkill Valley Land Trust has a conservation easement specifically for the protection of important box turtle habitat in Gardiner NY where over 106 individual box turtles have been documented since 2006.

For over a decade, the landowners have generously opened their property once a year for our very popular Turtle Day. Attendees have assisted in finding, documenting and learning about box turtles. This year, due to the safety concerns of COVID-19 this event will be “virtual” with a series of informative posts and videos in May!

Japanese Knotweed is one of the most aggressive terrestrial invasive plants currently attacking our ecosystems. It originates from Eastern Asia and was brought here intentionally in the 1800s as a decorative plant in gardens. Their small white flowers bloom August to September and have a lovely sweet smell. Japanese knotweed was also used for erosion control since it forms very dense thickets. Unfortunately, this growth behavior is why Japanese Knotweed is so destructive to our native ecosystems. Knotweed grows fast and will form thickets blocking any sunlight from getting to native plants which host native insects, microbes, and animals. Growing from three to fifteen feet tall, Japanese Knotweed can tolerate a wide range of conditions such as high temperature, shade, drought, stream channels, and is commonly found in disturbed areas.

Japanese Knotweed can now be found in a majority of states and is not only a huge environmental issue, but also an economic problem. In the search for water, the roots of Japanese Knotweed can grow into cracks and any other weaknesses in structures, leading to property damage. This can include walls, driveways, foundations and even underground pipes. 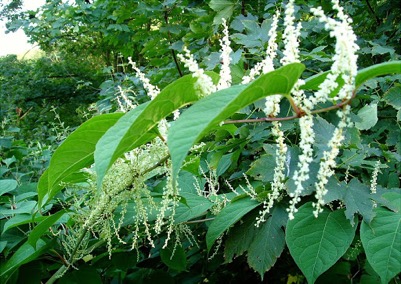 This picture of blooming Japanese Knotweed is from New York Invasive Species Information.

In the spring, from April to May, new young shoots emerge that are edible and delicious to eat. These shoots can be identified by the red/purple color spears which look similar to asparagus and have a flavor of lemony rhubarb. Shoots should be pulled out by the roots to avoid the plant from spreading.

A couple of good rules of thumb when foraging for any edible plants;

When removing Japanese knotweed from your property, it is worth remembering that any small piece of the plant can reproduce into more plants, so it is very important that you do not throw any parts of the Japanese Knotweed in your compost. Allow the removed plants/ plant parts to completely dry out and decay on a tarp and throw away in the trash.

My favorite recipe in the “Enchanted Broccoli Forest Cookbook” (part of the Moosewood Cookbook Seriesby Mollie Katzen) is A Quiche Formula. Rather than giving you a specific quiche recipe, it gives you the tools for making your own creation. I developed recipe for Japanese Knotweed Quiche from the Quiche Formula.**

**Remember there are lots of ways to vary this recipe depending on taste and dietary restrictions and the original recipe formula does a great job at suggesting alternatives.**

My favorite quiche crust to make is from leftover roasted potatoes. Simply chop or mash the leftover roasted potatoes and press into your oiled pie plate to form a crust. Place your empty crust in the prewarmed oven to crisp up while you prep the filling. Check to make sure you are not over cooking the crust, but since the potatoes are already cooked, there is no undercooking this crust. The fillings will get layered into the crust in the following order.

I like a good extra sharp cheddar to go with the flavor of the knotweed. Use about 1/4 to 1/3 pound, depending on the size of your pie plate. Either grate the cheese or cut into small cubes and sprinkle as the first layer over the crust.

Use the tender Japanese Knotweed shoots you collected. Wash and chop into small bite sized pieces and spread out over the cheese. If you want, you can also add some kind of protein. I used smoked turkey meat cut into cubes. Place your knotweed and protein (if used) over the cheese layer.

In a separate bowl, beat 3 eggs and 1 cup of milk or yogurt. For my recipe, I typically use plain Greek Whole Milk Yogurt.  Pour this mixture over the top of the filling and dust the top with smoked paprika.

Note: using yogurt instead of milk tends to shorten the cooking time.

Allow to cool for at least 10 minutes, serve at any temperature and enjoy!

Did you try  Cara’s Japanese Knotweed Quiche? Send us some photos!

You can read more about Japanese Knotweed, how to identify and remove on the New York Invasive Species Information Clearinghouse webpage