As part of an ongoing series of articles that examine native and invasive species found in our region, here we present Poison Ivy and Oriental Bittersweet

The old adage “leaves of three, let it be” refers to our native Poison Ivy (Toxixodendron radicans). While not a true ivy, this plant is more closely related to cashews and pistachios. The three “leaves” you see on the plant are actually part of the same trifoliate shaped leaf, where each leaf is actually a cluster of three leaflets. 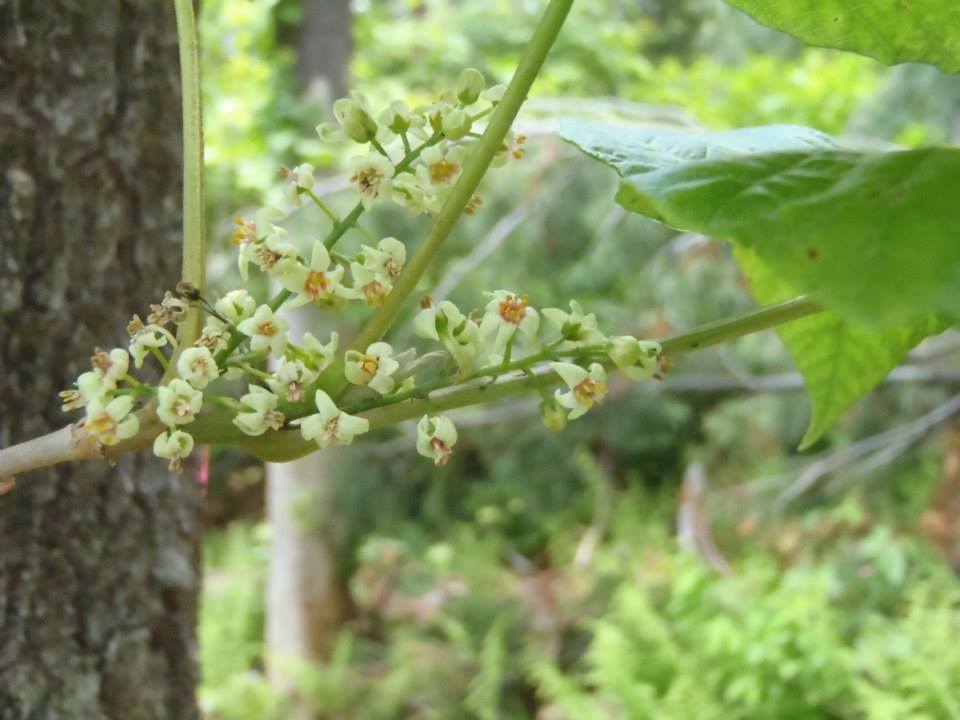 This common plant can grow as a vine or as a groundcover and its leaves start out with a hint of red in the spring, turning dark green through the summer, and finally a brilliant red in the fall. We are advised to avoid this plant of course, because all parts contain an oil called urushiol, which can cause an allergic reaction in most people. The very itchy rash can range in severity based on each individual’s sensitivity and exposure. As annoying as Poison Ivy may be to many people, humans have aided in its aggressive spread. Poison Ivy thrives along fragmented forest edges, which is why it can commonly be found along paths, roads, fields, and other disturbed areas.

The Poison Ivy vine will grow up trees and other vegetation, however, unlike the invasive Oriental Bittersweet, it does not strangle or uproot the tree. The plant itself is quite pretty when you can observe from a distance and see past its irritating oils. From May through July, the vine produces small clusters of green to white flowers with bright orange stamens. These flowers mature into white berries during the summer and provide an important food source for birds and small mammals who are not susceptible to the urushiol oil. The animals who eat the berries help distribute the Poison Ivy seeds through their droppings.

The Internet is full of information on how to treat Poison Ivy rash, should you inadvertently come in contact with the plant. Treatment will depend on the severity of each individual’s allergic reaction. If you know you came in contact with the plant, one pre-treatment if you cannot get home immediately to wash with soap and water, is to apply the sap from the stem of a Jewelweed plant. This native flower is often growing in wet areas and has been shown to limit the allergic reaction of poison ivy in some people. Extract from the plant, however, does not have the same properties.

While Poison Ivy gets bad press due to the oil it produces, it is a beautiful native vine that lives in harmony with other native species without overpowering them in the ecosystem and can be appreciated from afar. A healthy continuous forest ecosystem helps to keep Poison Ivy plant populations in check.

Four factors make the plant an aggressive invader in the ecosystem:

1) The plants reproduce at an alarming rate (more on this below);

2) The vines produced will strangle and uproot native species;

3)  The leaves will create dense masses that block off sunlight to other plants;

4)  The roots can siphon away nutrients from other plants.

In the late spring, Oriental Bittersweet produce clusters of small, green flowers on separate male and female vines.  The fruit produced in fall is a brilliant red fleshy fruit with a bright orange outer skin making it attractive to unsuspecting wreath makers who harvest the vines and bring the seeds to their front doors. Many species of birds enjoy eating Oriental Bittersweet fruit, however, the birds then dispose of the seeds in their dropping resulting in seed dispersal to new areas.  In addition to fruit production, the vine will spread by way of root sprouts from another plant.

Oriental Bittersweet has also been hybridizing with native bittersweet vines which are now at risk of extinction due to the hybridization. 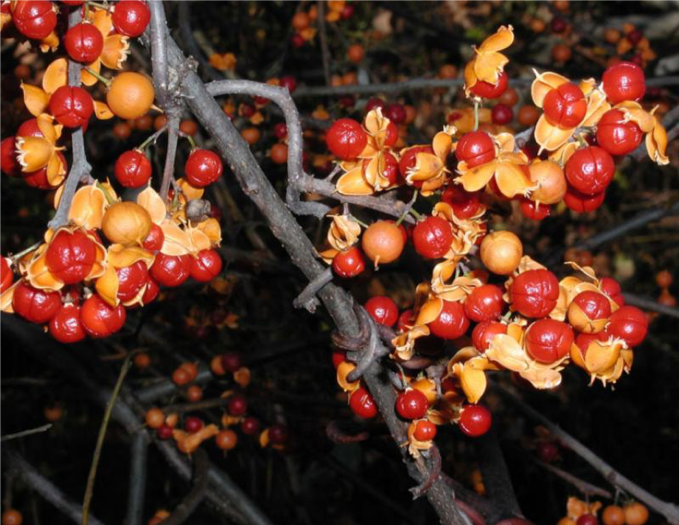