As part of an ongoing series of articles that examine invasive and native species found in our region, here we present the Invasive Emerald Ash Borer versus the Native Tiger Beetle 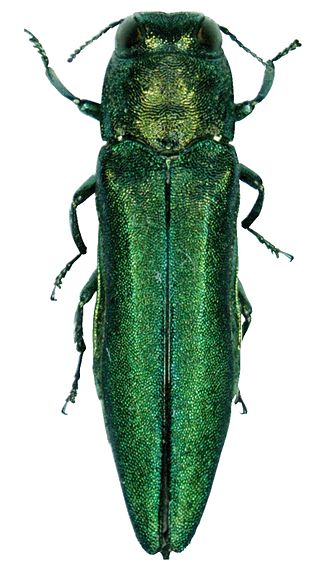 By now, most of our readers have heard about the plight of our native Ash trees which have been under attack by the Emerald Ash Borer (Agrilus planipennis). The native ash tree has been an important economic

resource throughout the history of the U.S. Ash is the type of wood used to make the classic baseball bat, the sound when an ash-wood bat hits a baseball is synonymous with American summers. Ash-wood has also been used to make cabinetry, tool handles, doors, and bows. Unfortunately, our native ash trees have been decimated in recent years by the Emerald Ash Borer (EAB). Officially detected in Michigan in 2002, some suspect EAB may have been in the U.S. as far back as the late 1980s.

The emerald Ash borer larva will spend about 2 years living in the cambium or growth layer of the tree, just below the bark. During this time, it will create tunnels in the cambium which makes it hard for the tree to transport nutrients and water to the crown of the tree and the tree will start to die. Late spring and early summer is when EAB adults will emerge from the ash trees through D-shaped holes as they shew their way through the bark. The adults will then eat some of the foliage, mate, and fly away to infest new ash trees by laying their eggs in the bark and begin the cycle all over again. The rate of spread can be up to 12 miles a year! The infested ash trees will start to die within a few years of the initial attack, which has decimated the population of Native Ash trees.

You can recognize an Emerald Ash Borer by it’s brilliant color and shape of the body. The EAB is about ½ inch long and a metallic green color. The body is long and thing with a straight body that tapers as the rear. There are scientists working to control EAB and to safe the ash trees. If you have any ash trees that seem to be resisting EAB attack, you can contact the folks at the Monitoring and Managing Ash program. They are working to propagate the ash trees with a genetic resistance to EAB.

A native insect that is often mistaken for EAB by unsuspecting nature lovers is the Tiger Beetle, more specifically, the Six Spotted Green Tiger Beetle (Cicindela sexguttata). This beetle is also a brilliant metallic green, however the body shape and size is different and easily distinguished from the invasive EAB. The adult tiger beetle is typically larger than EAB measuring in at 5/8th of an inch long and have a pinched in look between the thorax and the abdomen, giving the insect the appearance of a waistline. 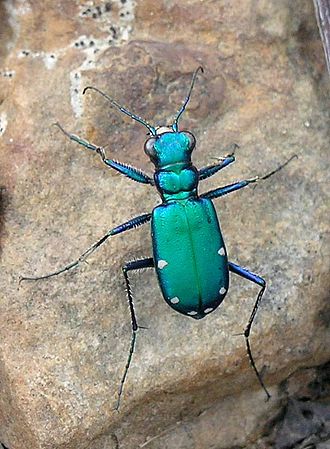 There are an estimated 147 types of tiger beetles in the U.S., but the Spotted Green Tiger Beetle is most likely to be confused with the Emerald Ash Borer. Tiger beetles are considered good bugs and wonderful to have in your garden as they are a predator beetle. Both the adults and larva will feast on the bad bugs attacking your plants. However, you are more likely to witness a tiger beetle while hiking on trails since their preferred habitat is the forest floor where they can hunt insects, caterpillars, and arachnids. In early summer the females will lay their eggs on dirt patches on the forest floor where the larva will hatch and burrow into the soil.

In order to eat, the larva will lunge out of their burrow and catch prey, living like this and growing over the next year before pupating to the adult state. As adults, the bright green color helps them hide on plants where they will stalk and attack passing bugs who didn’t happen to notice the tiger nearby. While beautiful to see, beneficial to the ecosystem, and helpful to human gardeners, the tiger beetle will bite if feel they need to defend themselves, so it is best to avoid picking them up. Instead admire their beauty and service to the ecosystem and let them continue on their way.

For more information on the emerald ash borer, check out https://www.aphis.usda.gov/aphis/ourfocus/planthealth/plant-pest-and-disease-programs/pests-and-diseases/emerald-ash-borer

If you have any ash trees that appear to be surviving amongst many dead ash trees, check out the Monitoring and Managing  Ash program http://www.monitoringash.org/

For a fun overview of the Six Spotted Tiger Beetle, check out the Indiana Department of Natural Resources page: https://www.in.gov/dnr/kids/5841.htm