As part of an ongoing series of articles that examine invasive and native species found in our region, here we present the Tree of Heaven verses the Staghorn Sumac.

This shrub can be found in the Hudson Valley but also in all other areas of New England, south to Georgia, north into Canada, and into the Midwest. The plant’s large range is because it can adapt to many different soil conditions. Staghorn Sumac is often found in areas of rocky soil or extreme sloping ground where other plants have trouble thriving.

Staghorn Sumac has a tree-like shape and can grow to be anywhere from three to 33 feet tall. The plants grow nearby one another in colonies that can appear shrubby. These colonies are made up of a single sex of the plant. The female plants are the only ones that bloom, forming a pyramid shape of maroon fruits during June or July.

Both sexes of the plant have branches that are lined with pinnately compound green leaves. Meaning multiple leaflets line a twig arranged symmetrically on either side (see photo below).

The twigs of Staghorn Sumac, as well as its berries, are covered in a soft fuzz that resembles the velvet of deer antlers. This is how Rhus typhina came by its more common name, “Staghorn Sumac.’’ 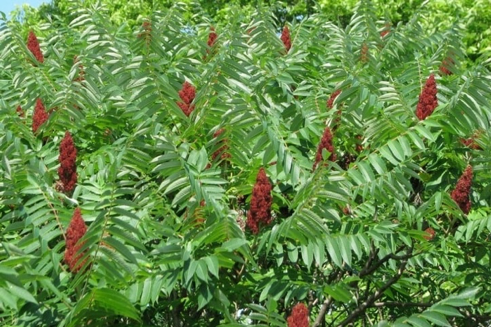 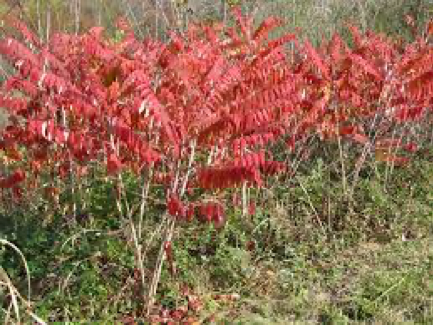 When you hear the word “sumac” the first thing to come to mind might be another, less friendly plant, Poison Sumac. Luckily Poison Sumac is actually very rare in the Hudson Valley.

Staghorn Sumac, despite the nominal similarity, is quite different from Poison Sumac. Staghorn Sumac is not at all poisonous but is in fact edible. The Native Americans would use its red seeds to make a beverage similar to lemonade.

The berries are a source of food for many animals as well. Species of North American birds and insects, including honey bees often feed on the Staghorn Sumac. It is significant to beekeepers as they use the seedpods as a smoker fuel to calm hives.

To make Staghorn Sumac Lemonade: When the berries on the cone of the plant are red and ripe they will have a tart lemony taste, this is usually the case in August. You can pick a few of these berries up and mix a tablespoon of them in hot water or allow them to sit in water in the sun on a warm day. The liquid that filters out from this mixture when you strain it is for your very own pink sumac lemonade.

The invasive species for the month of July is known as Ailanthus altissima or commonly as “tree of heaven.” The tree of heaven originated in China and was brought to the U.S. in the late 1700s as an ornamental shade tree.

Its lack of natural pests and diseases has caused it to become extremely invasive and very harmful to surrounding native plants. Thickets of Ailanthus produce an abundance of seeds that outcompete other plants in the area. The tree of heaven is also harmful because its roots release a toxin that poisons other nearby species through the soil.

For these reasons, Ailanthus is an enemy to the natural ecosystem. It can be harmful to the built environment as well. The tree’s roots are known to destroy ground structures such as pavement, sewers, and the foundations of buildings.

Defense against the tree of heaven and its dangers can be very difficult. It often takes a long and integrated management plan to remove an area invaded by this species.

It is recommended to pull young seedlings directly out from the ground with their root systems, particularly before they are able to flower. For larger trees, removal is more complicated as the tree can regrow from a cut trunk, stem or branch.

Even more problematic and sneaky are the tree’s roots. When the stump is cut the lateral roots can form new sprouts a short distance from the original tree, which is known as root suckering. In order to prevent root suckering, the involvement of chemical treatments, carefully administered to a cut stump is recommended.

One thing that Ailanthus has trouble tolerating is shade, so the introduction and maintenance of competitive native species near the tree of heaven could help in its reduction.

The most important step in removing Ailanthus, as in all invasive species removal is identification. This is made more difficult because the tree of heaven is often confused with our native species, Staghorn Sumac.

The two do vary in appearance in a couple of key ways.

Ailanthus gets both its scientific and common name “tree of heaven” because it grows upward at an impressive rate of 10 to 15 feet per year. The tree can reach up to 80 feet in height which would tower over even the tallest specimens of Staghorn Sumac.

Unlike Staghorn Sumac’s cone-like red seeds, Ailanthus’ fruits hang in clusters as samaras or winged fruits that are orange to brown in color. When not flowering, leaflets prove useful in identification. Tree of heaven’s leaves have two glands at the base that are absent on Staghorn Sumac which has leaves that are ribbed on the edges.

The final identifier utilizes a sense of smell rather than sight. When an Ailanthus leaf is broken off, it produces a distinct odor that some describe as rotten peanut butter or burnt rubber.

Using these characteristics, it becomes easy to tell which plant can produce a refreshing beverage and which only serves to poison its native neighbors. 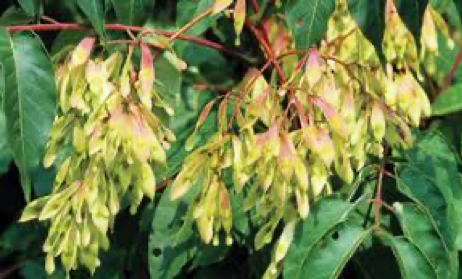 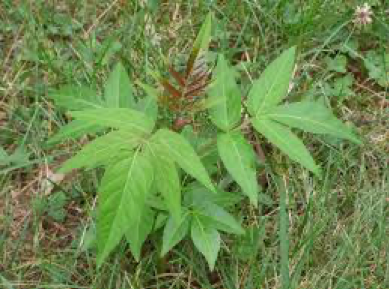