Growing up in the northern Adirondacks, I had not encountered either of the species I am writing about for this article. Our forests were not yet plagued by the invasive multiflora rose and the pawpaw was a species, that while native to the eastern US, was not acclimated to the extreme cold of the Adirondacks.  In attempting to write this article on this month’s featured species, it occurred to me that my first experience with both of these species was in the mid 1990’s when I worked for the Appalachian Trail Conservancy, which at the time was called the Appalachian Trail Conference.

With years of playing in trail-less forests, hiking the Adirondacks, and a 7-month long thru-hike of the Appalachian Trail, I was still unprepared for the onslaught that was multiflora rose (Rosa Multiflora) along the Appalachian Trail corridor. This shrub was originally imported to the United States by the horticultural industry in the 1860’s as a readily available rootstock for grafted rose propagation. It later was promoted by the USDA as a form of erosion control, wildlife enhancement, and a living hedging material perfect for keeping livestock in the small homestead pastures of the northeast. Over time, abandoned farm fields and livestock pastures grew back into forests, leaving traces of agricultural history such as stone walls.  The multiflora rose “hedge” quickly spread to dense impassable tickets that outcompeted native species, including our own native wild rose.

The lands throughout much of the Hudson Valley, including many of the WVLT conservation easements and fee lands, show signs of this agricultural past, and multiflora rose is prevalent. It can be identified by the multiple branching canes with thick thorns. The leaves are compound with 5 to 11 leaflets on a single leaf, each leaflet is ½”-2” long. The flowers bloom in May through June in the Hudson Valley and form small clusters of white flowers, each with 5 petals. The fruit (or hips) are small and bright red, containing many seeds. The fruits are eaten by birds who will then transport the seeds to other areas of the forest by their droppings, spreading the plant. Multiflora rose on your property is not easy to eradicate, but it is possible with determination and perseverance. Continual mechanical cutting of the established plants plus pulling any seedlings is effective but will take many years as the seeds in the soil will take advantage of any openings you create by cutting back the ticket.  The process can be enhanced by the use of chemical control along with the mechanical control. Applying herbicides directly to cut stems to prohibit sprouting from the root base will greatly shorten your fight against the multiflora rose. 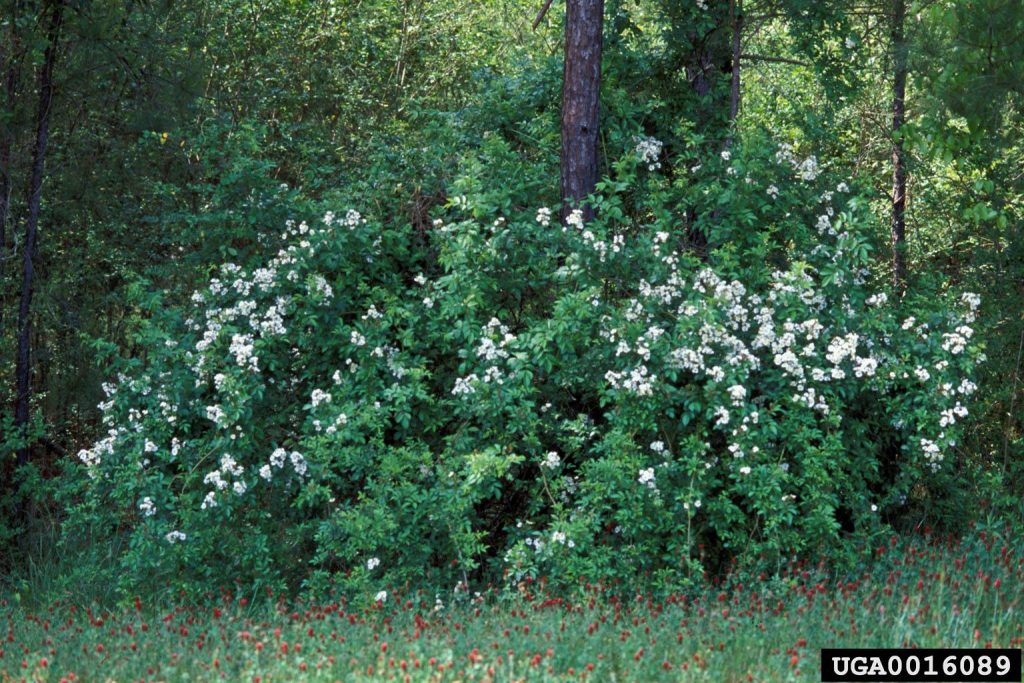 While multiflora rose was an invasive that I learned about the hard way, leaving behind skin and blood, my first exposure to the native pawpaw tree was a much more enjoyable experience. Pawpaws (Asimini triloba) are a small understory tree that grows in patches in forests throughout the east coast of north America. When I was working for the ATC one fall, my work partner and I came across the most amazing smell in the forest which was almost impossible to describe: a vague musky mango banana with a twist of pear is close, but doesn’t do it justice. The ground was littered with a green and brown fruit, roughly the size of a yellow mango and the thicket of small trees above were full of unripe fruit. The leaves were dark green and oblong, roughly 10-12 inches long and 4-5 inches wide.  We had no idea what these lovely smelling fruits were, so we collected a few, along with a sample of the leaf for identification. We figured something that smelled that wonderful had to be edible, however we needed to perform a proper identification before any taste-testing. Back at camp that evening, we pulled out our Peterson Field Guide to Trees and a book on foraging a friend had given me called Stalking the Wild Asparagus. We were excited to have discovered we had stumbled upon the infamous pawpaw. One taste and we were both hooked. The flavor is unlike any other, yet often described as a blend of many and the texture is smooth as custard.  Each fruit contains several large seeds that are too large for dispersal by birds.

The pawpaw is the most northern native growing tropical fruit in the Americas. While the native range is described as the northern extent of southern New York’s Delaware river valley, the climate has shifted since that original assessment and the pawpaw will grow in the Hudson Valley with several private patches growing in Ulster County. The first trees I planted at our new house in Kingston four years ago were two pawpaw saplings and I eagerly await their first fruiting year. The pawpaw fruit has a very short shelf life, developing from a perfectly ripe fruit to fermenting and rotten within days, and will not ripen well if picked early like some fruits. 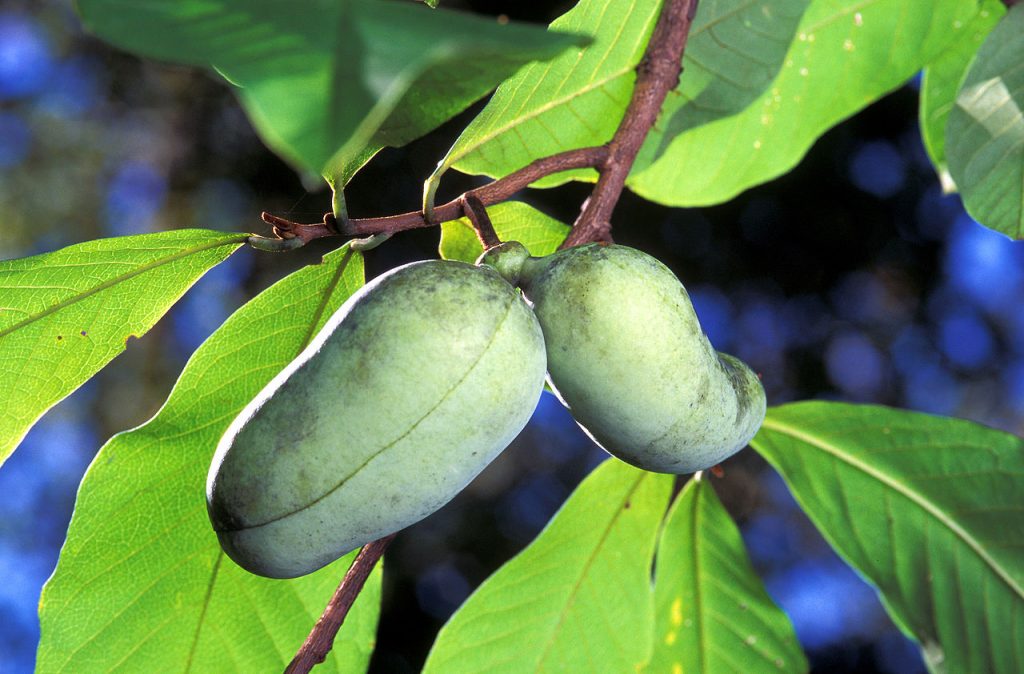 For these reasons, the fruit has always remained more of a cult status among gardeners and foragers, than a mass market consumable fruit you could find anywhere. You may be lucky enough to find some at local farmers’ markets this fall. I’ve also heard rumors of local diners who sometimes are able to offer pawpaw pie when the fruit are in season. In the spring, the trees produce a lovely dark red bell-shaped flower that attracts flies for pollination. At least two trees must be planted if you want fruit as they will not self-pollinate. Fall is harvest season for the fruit, so be prepared to process the pulp if you want to save some for the rest of the year. The pulp freezes well to be used later. Some of my favorite recipes include pawpaw butter (similar to apple butter, but better) pawpaw preserves with bourbon, and pawpaw pancakes. In the book, Stalking the Wild Asparagus, there is a recipe for a pawpaw pie which I have yet to try. The last line of the recipe is “Lock the doors to keep the neighbors out.”