Since 2018, the Wallkill Valley Land Trust (WVLT) has been protecting approximately 57-acres of land under a conservation easement in Gardiner. Property owners Raymond and Anne Allbright Smith have been monitoring the turtles on their land since the mid-2000s and had decided to place the easement on their land in order to protect the species’ habitat.

Currently, there are 109 documented Eastern Box Turtles on the property.

Anne Allbright Smith, author of The Silence of the Bell: Monitoring Eastern Box Turtles with Australian Cattle Dogs, tells her story of falling in love with this beautiful species: “We were building a house and the construction workers thought that they had found a Blandings Turtle but they had really found an Eastern Box Turtle. Then I was out birding in the big field and stumbled over what I thought was a rock but it was a box turtle. I was captivated by the beauty of those reptiles.”

From humble beginnings, this fascination with Eastern Box Turtles has given rise to both a book and an annual Turtle Day. 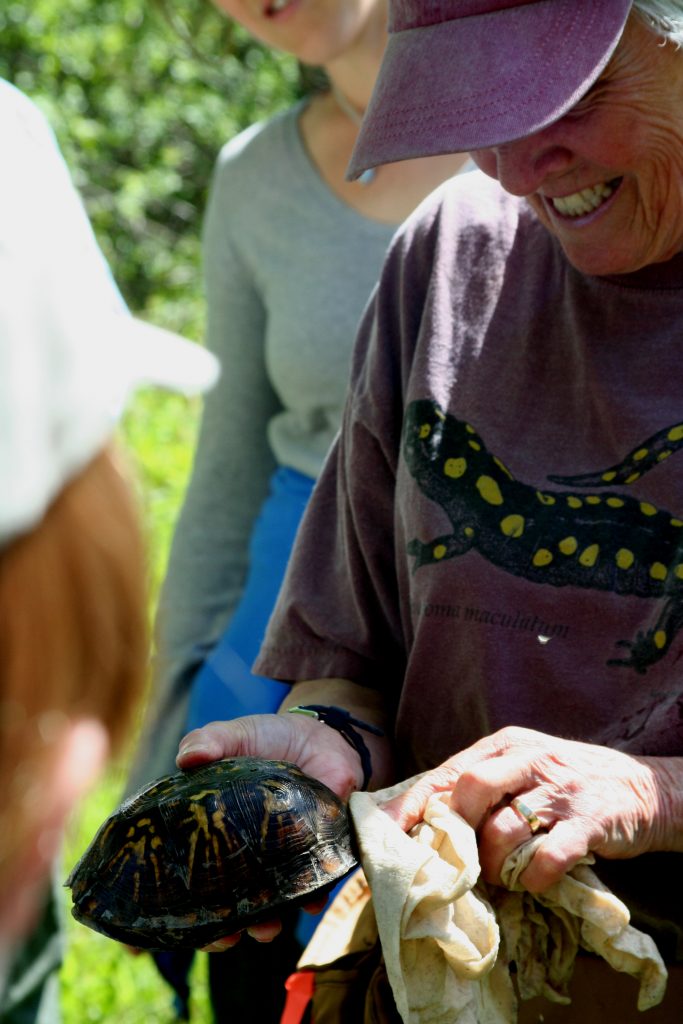 Smith’s book, published in 2015, follows the decade-long navigation of her Gardiner property in search of box turtles. Her Australian Cattle Dogs, she says, were her inspiration to write. Having transferred from American Kennel Club (AKC) tracking to turtle tracking, Anzac and Diggy were “fabulous fun and skilled hunters.” Smith clearly and humorously details her experience with these creatures, both canine and reptilian, and readers can expect plenty of charming pictures.

Each spring, the WVLT hosts Turtle Day on the Smiths’ Gardiner property. On the two-hour journey, participants can expect to learn the ins and outs of box turtle identification and monitoring. Since Eastern Box Turtles are quite active throughout the area, guests are guaranteed to see one of these beauties up close.

Unfortunately, this year’s Turtle Day was suspended, but Smith says that she looks forward to seeing the event resume in capable hands. The Smith family has sold their house, along with 65-acres of land, but Anne Allbright Smith says that the new owners are excited to carry on this well-loved tradition.

Getting the community involved in environmental conservation is an important endeavor, she says, “and we engage many people in the neighborhood and town of Gardiner. The more people appreciate these reptiles the better the protection will be.”

As she passes the torch, the ever-growing love for the Eastern Box Turtle lives on.

Caitlyn has a bachelor’s degree in Psychology from Stony Brook University and is currently working on her second Bachelors degree in English at SUNY New Paltz.

If you would like to write an article for a future Wallkill Valley Land Trust Field Notes, please contact Cara Gentry, WVLT Coordinator of Land Stewardship.