A Celebration of the Rosendale Trestle

By Matt Kierstead with Vals Osborne

The year 2020 heralds twin anniversaries for the Rosendale Trestle. Construction of the first railroad bridge over Rondout Creek at Rosendale, completed in 1872, began 150 years ago in 1870. The year 2020 also marks the 125th anniversary of the second, replacement bridge, started in 1895 and completed in 1896. These giant railroad viaducts, large examples of the type when built, were once important regional commerce links, and the second viaduct, now part of the Wallkill Valley Rail Trail, is an important link in the new Empire State Trail. 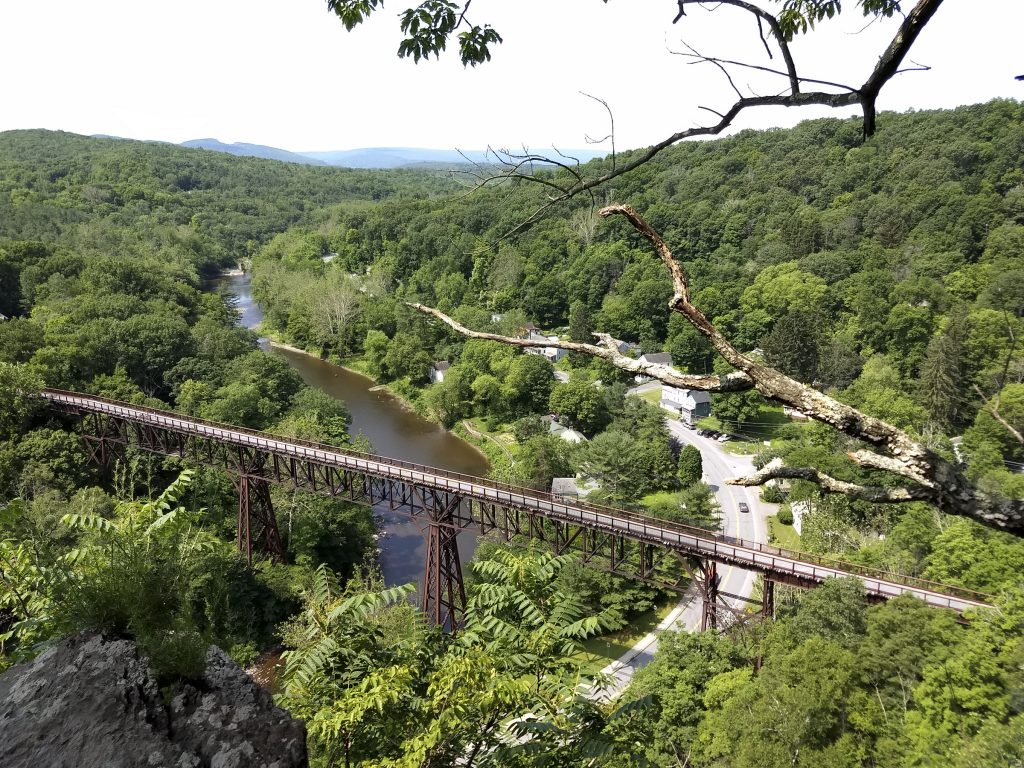 Although commonly called a “trestle,” the Rosendale railroad bridge is actually a “viaduct” in engineering parlance—a long bridge with multiple distinct spans supported by separate piers or towers. Early viaducts were masonry structures, and later ones were made of iron or steel. Trestles, typically made of timber, have a continuous deck supported by many closely spaced bents or towers, connected by a system of horizontal ties.

The Rosendale viaduct’s history is tied to the Erie Railroad. “The Erie,” one of the earliest US railroads, chartered in 1832, was conceived as a long regional route in competition with the Erie Canal, serving as an outlet for goods produced in the interior by connecting Piermont on the Hudson, twenty-five miles north of New York City, with Dunkirk on Lake Erie, forty-five miles south of Buffalo. Construction began in 1836, and the first train ran over the entire line in 1851. The Wallkill Valley Railway, which cooperated closely with the Erie for a time, was envisioned in the 1860s to stimulate industry and the economy of the Wallkill River Valley. The first railroad in Ulster County, it was organized in 1866 to join Montgomery and New Paltz with the Erie at its southern terminus in Goshen. The line reached Gardiner by 1869, New Paltz in 1870, and Rosendale and Kingston in 1872. The Wallkill Valley line established a connection with the New York, West Shore & Buffalo Railroad (later New York Central) at Kingston in 1881, carrying produce and industrial products for decades thereafter. Passenger service on the line ended in 1937, and freight service gradually dwindled until it ended on December 31, 1977.

The greatest physical obstacle to construction of the Wallkill Valley Railway line was the Rondout Creek valley crossing at Joppenbergh Mountain in Rosendale. The first Rosendale viaduct here was completed in 1872 by the Watson Manufacturing Company of Paterson, New Jersey, for $250,000 during an intensive post–Civil War period of large US railroad bridge- building. The mostly wrought-iron bridge was 940 feet long and was among the tallest railroad bridges built in the US at the time, soaring 150 feet above the Rondout. The viaduct’s long spans were Post-type trusses, a design patented in the 1860s by engineer Simeon Post, who leased his design to Watson. A bridge truss is a cage-like structure incorporating diagonal and vertical wood or metal members subject to tension and compression forces, joined together to form a stiff frame, giving it the strength to support its own weight and the vehicles crossing it. A regional newspaper account published at the time of construction claimed this first Rosendale viaduct was the “tallest span bridge” in the US; however, a taller iron railroad viaduct over Lyon Brook in Oxford, New York, had been completed in 1869. Rosendale’s 1872 viaduct was eclipsed by the Erie’s 235-foot-tall Portage Viaduct in western New York in 1875. 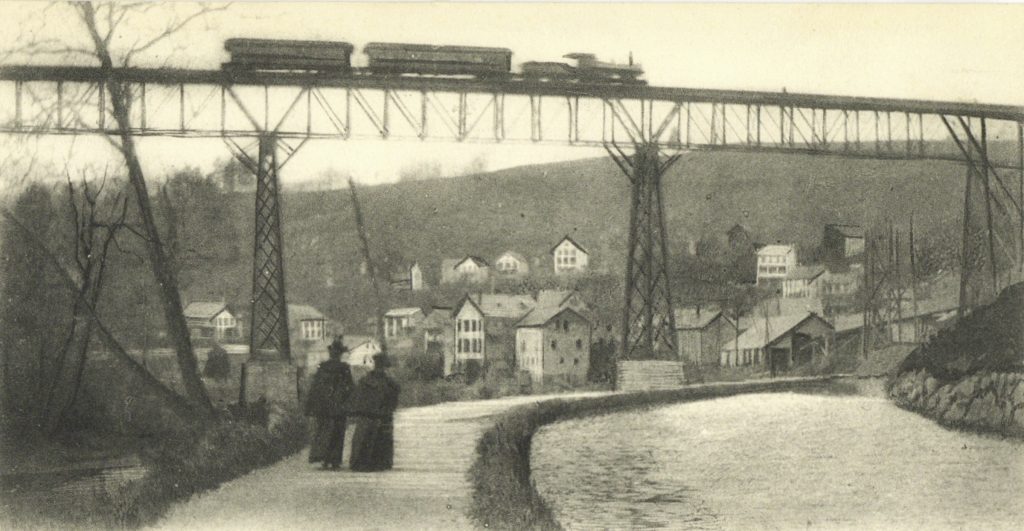 In 1888, the first Rosendale viaduct was experiencing substructure issues, requiring repairs to its masonry abutments and piers. By the 1890s, the original wrought-iron superstructure was no longer strong enough to safely support the forces and weights of new steam locomotives, heavier freight cars, and longer trains. The King Bridge Company of Cleveland, one of the country’s most prominent and prolific bridge builders, was contracted to build an all-steel replacement viaduct in 1895, using Pratt-type trusses for the three long spans. The Pratt truss design was patented in 1844 by Massachusetts engineers Thomas Pratt and son Caleb. It became a standard truss type for American railroad and highway bridges through the mid-twentieth century.

The 1896 Rosendale viaduct has ten spans: three connected Pratt deck trusses over the creek and south bank, flanked by seven deck girder approach spans (three to the north and four to the south), all built of riveted steel members, as were the new towers, stiffened by diagonal braces and horizontal struts at tops and bottoms. Some original stone piers were retained, and some were replaced with concrete. The abrupt curve in the south approach was reduced. This viaduct is significant as a large- scale representative example of late nineteenth century steel railroad viaduct engineering, built by an important US bridge-building firm. It was among New York’s larger steel railroad viaducts when built but was later eclipsed by structures like the Erie’s almost 200-foot high, 3,200-foot-long 1908 Moodna Viaduct at Salisbury Mills. 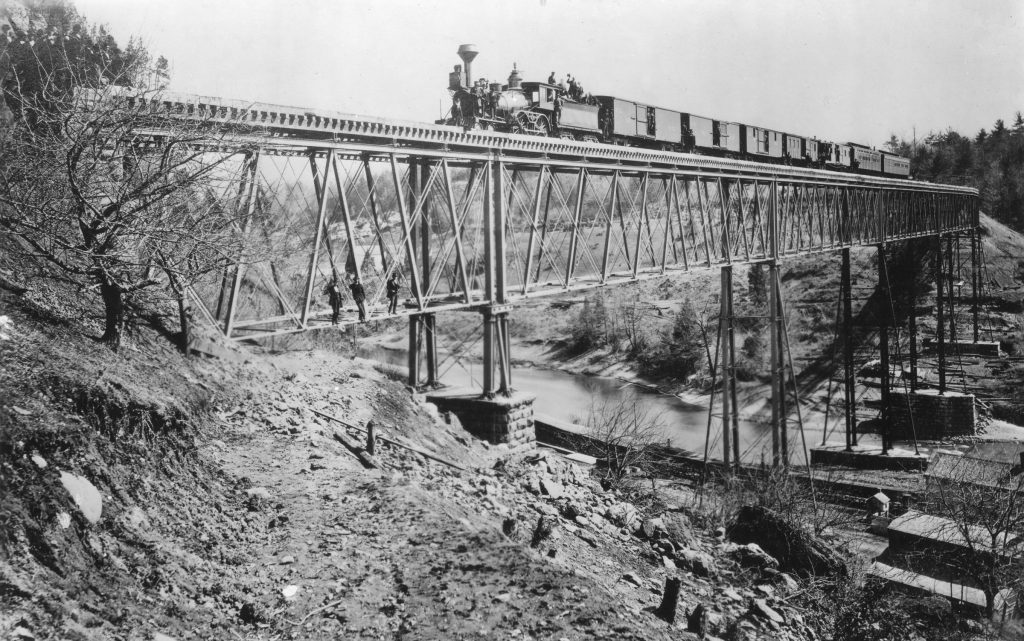 In 2009, Open Space Institute (OSI) and the Wallkill Valley Land Trust (WVLT) acquired the 65-acre Wallkill Valley Railroad property in the towns of Rosendale and Ulster in a tax-default sale, as an extension of the Wallkill Valley Rail Trail, opened in New Paltz in 1991 and Gardiner in 2007. The highlight of this acquisition was the iconic Rosendale “Trestle.” WVLT, in collaboration with OSI embarked on a four-year, $1 million campaign to restore and open the entire 940-foot-long bridge to public use. Corten steel railings were fabricated and attached to the steel structure, damaged railroad ties were replaced, and commercial-grade decking made of recycled materials was installed by volunteers led by WVLT Board Member Rob Hare. The bridge opened in June 2013. The following year, a pedestrian access trail on the south end of the bridge, allowing easy access to downtown Rosendale, was completed.

This year, OSI and WVLT again joined forces to complete improvement work on the 9.5 miles of the Wallkill Valley Rail Trail north and south of the viaduct, including safer road crossings, wider trails, better drainage, and directional signage. WVLT retains ownership of the Rosendale and Ulster sections of the trail and the viaduct, and stewards several trail easement properties, including the 1.5-acre Williams Lake Project (Fifth Lake) section of the Rail Trail. The 2009 acquisition of the Wallkill Valley Railroad property and Rosendale viaduct and various improvement projects, has doubled the length of the Rail Trail, providing the public with a 22-plus-mile-long linear park traversing Gardiner, New Paltz, Rosendale and Ulster. A majority of the Wallkill Valley Rail Trail is also now part of the Empire State Trail.

Matt Kierstead of Milestone Heritage Consulting is an industrial historian from Marlboro, NY who specializes in research, documentation and interpretation of historic engineering, industrial and transportation resources. His recent projects include Historic American Engineering Record (HAER) documentation of the 1875 Erie Railroad Portage Viaduct for the National Park Service and Norfolk Southern Railway, and interpretive panels for the “Albany-Hudson Electric Trail” and “Maybrook Trailway” segments of the Empire State Trail. Vals Osborne, a member of the board of Wallkill Valley Land Trust, is co-chair of the Education Committee and chair of Houses on the Land Historic House Tours.