In Memorium of Anne Allbright Smith: A Passion for Nature

In Memorium
Anne  Allbright Smith: A Passion for Nature

In 2004, while building their house in Gardiner, Anne and Ray Smith discovered a turtle on the site. It was a chance encounter that would eventually lead to identifying and cataloging many more native Eastern Box Turtles, writing a book on the topic, creating a conservation easement on the property to help protect them and then holding a series of annual talks, “Turtle Day,” for the Wallkill Valley Land Trust (WVLT), which would be one of the organization’s most popular programs for a decade.

Recently, Anne passed away, but her commitment to the turtles and to protecting and conserving open space will endure for generations. 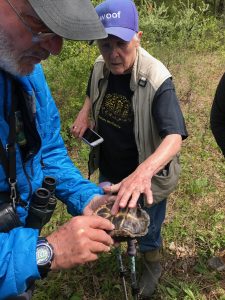 The Eastern Box Turtle, (Terrapene c. carolina) is one of 20 species of turtles found in New York State. Most are located on Long Island and in the Mid- and Lower- Hudson Valley, according to the New York State Department of Environmental Conservation (DEC) — which lists it as a species of “special concern.” At first glance, the Box Turtle seems like an odd little fellow. These turtles spend most of their time “wandering open fields and forests, only retreating to shallow pools or wetlands to soak during very hot and dry periods,” the DEC notes on its website. “It can completely close its shell, distinguishing it from other turtle species.”

But having seen them live, and slowly crawling about, it is easy to fall in love with these hard-shelled creatures.

And that’s exactly what happened with Anne. After finding that first turtle on their property, the Smiths found another one the following year. Anne then engrossed herself in learning everything she could about them. It wasn’t long before the love affair evolved into a seriously dedicated effort to observe and track these reptiles. That first confirmed box turtle was #1 or Alpha (May 26, 2005). Anne then got a DEC license which allowed her to conduct Turtle Day for the WVLT as well as allowing her to handle and put transmitters on the turtles for educational purposes.

“At first she would give a number and a name to each new turtle,” recalls Christie DeBoer, Executive Director of the WVLT. “There was Caroline, and Randy, which was named after her son but they then realized Randy was a girl, so it was renamed Randi (#5). After a while, only the numbers remained since there were so many turtles being tracked.”

Anne hosted the first WVLT Turtle Day in May of 2009. “People gathered in Anne and Ray’s living room for a crash course in everything Box Turtles: their anatomy, behavior, and the plan for the Turtle Day,” DeBoer says. “Once outside, we would spread out as a group walking the fields looking for turtles. Once the first one was found, a whistle was blown and everyone would gather to see the turtle. One of the specialists (Anne, or Joe Bridges or Beth Herr) would hold the turtle and talk more about it, and photos were taken. After each annual Turtle Day, Anne would email the participants to tell everyone which ones were found or if there was a new one found.” 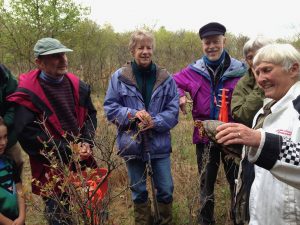 Aside from turtles and dogs, Anne loved beavers and would give talks about them at Woodland Pond in New Paltz. But her connection with Box Turtles was particularly strong.

“In fact, I remember Caroline (#10), and how special she was to Anne,” DeBoer said. “I personally attended every Turtle Day except for the first one (I missed 2009, but attended 2010 through 2019), and I remember Anne saying, ‘That’s Caroline!’ every time we found her.”

In an email to DeBoer in 2015, Anne shared how special Caroline was to her. “I have often described Caroline as the prettiest of our 90 turtles,” Anne wrote. “She is the only one that Joe [Bridges] and I have seen lay eggs. She is one of only a handful that we have seen copulating. She has been found on Turtle Day in 2011, 2014, and 2015. We have known her since 2007. She has been found on the aqueduct and in our field, in a relatively small area so we felt we could count on her. She was even seen digging test holes in the area in which she laid eggs in 2009.”

Sadly, Caroline perished in 2015. Anne found the beloved turtle after walking out from the woods to the aqueduct. It had been mauled by a lawnmower.

Anne was heartbroken. The New York City DEP normally mows in the late fall, but that year it was done earlier — just as Caroline was active and about. “Caroline paid the price,” Anne wrote. “We have put a surveyor’s flag with her name on it at the site. I wish we could do more. I don’t have to tell you how I feel.” 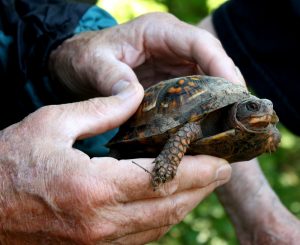 The last Turtle Day was in 2019. A total of 109 individual Eastern Box Turtles were discovered and documented by Anne Smith, including years and years of “repeat visitors” which illustrate the health and survivorship of this incredible land turtles. You can read an interview by Caitlyn Bigelow, SUNY New Paltz Student with Anne which occurred last month (by phone) here.

The Smith property has since been sold. But even with Anne gone, the new owners promised Turtle Day will continue (after the pandemic ends). In the meantime, it’s important to remember and reflect upon Anne’s work, and her tireless dedication to the Eastern Box Turtle and to the preservation of open space that they depend on. It’s only when we commit to something outside of ourselves, that we truly understand ourselves and the precious connection we have to nature. 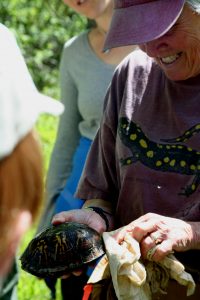