Many think of holly is one of the quintessential winter holiday plant species. The evergreen leaves and red berries that bring color to the winter months can brighten everyone’s mood. Truth be told, there are over 480 species worldwide within the Ilex genus to which holly belongs. The genus varies in form from trees to shrubs and vines and can be either evergreen or deciduous. Different species have different growth ranges and berry colors.

For month’s species spotlight, we will review two species of holly, one native, and the other an emerging invasive species. The fruit of most holly species can be toxic to humans and care should be taken if planted in an area frequented by small children.

American Holly (Ilex opaca) is a slow growing understory tree native to North America that can grow up to 60 feet in height. The leaves are dark green, non-glossy, spine tipped leaves. The tree is dioecious meaning it has both male and female flowers on separate plants.

The female trees produce red berries which provide an important food source for birds and mammals. The white fine-grained wood has been used for inlays. This native holly responds well to trimming and can be shaped into beautiful evergreen hedges and topiaries. 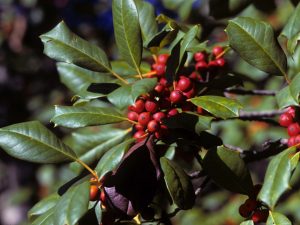 Japanese Holly (Ilex crenata) is a tier 2 invasive species in the Lower Hudson Valley, which means its just starting to emerge as an invasive species in our region. While Japanese holly is not one that is typically used in holiday decorations, however it has been planted as an evergreen decorative shrub. It grows up to 12 feet tall, sports a very small leaf only 1 to 3 cm long and has a small understated black berry.

The shrub is spread to other areas by birds dispersing the seeds. This type of holly has taken foothold in areas of Long Island, Staten Island, and parts of the lower Hudson Valley where it has grown into dense thickets, outcompeting native vegetation. 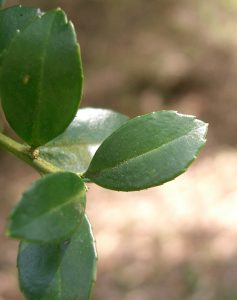