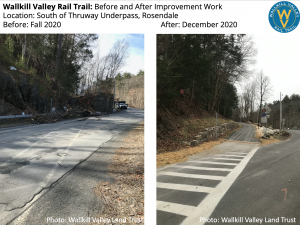 Ulster County, N.Y. (December 18, 2020) — The Open Space Institute (OSI), in partnership with the Wallkill Valley Land Trust (WVLT), and the Hudson River Valley Greenway, today announced the completion of a $1 million project to improve the northern 9.5-mile stretch of the Wallkill Valley Rail Trail. The section of trail, located in the Towns of Rosendale and Ulster, begins at Cragswood Road in New Paltz and ends at NYS Route 32 in the City of Kingston.

This stretch of the rail trail features unique vistas of the Shawangunk Mountains and the Rondout Creek as well as historical cement quarries and Joppenbergh Mountain.

The project started in the summer of 2020 to improve overall public access to the OSI/WVLT-protected section of the trail. With the new host of improvements, the trail is primed for inclusion as part of the Empire State Trail.

“With people looking to connect with nature, it is critically important to make these outdoor destinations safe and welcoming. Whether it be OSI’s River-to-Ridge Trail or projects we’ve supported along the way, such as the restoration of the Rosendale Trestle, OSI is proud to continue our work in the region to protect land and make it more accessible to the public,” said Kim Elliman, president and CEO of OSI.

Beth Bengtson, President of the WVLT, noted that the improvements reflect the benefits of collaboration between agencies, non-profits and other organizations. “The upgrade of the rail trail has essentially created a completely new experience for walkers, hikers, bikers and anyone using the trail for recreation and relaxation,” she said.

“The improvements not only addressed safety, drainage and other structural issues along the rail rail trail, but also included grading and landscaping designed to make it more pleasurable for users,” said  Christie DeBoer, Executive Director of the WVLT. “It is a big win for the entire community.”

State Parks Executive Deputy Commissioner Tom Alworth said, “This project reflects the kind of teamwork by public-private partnerships at State Parks that is accomplishing so much across the state. This work in the Hudson Valley will help make the Empire State Trail a world-class destination at a time when New Yorkers are flocking to healthy and safe outdoor recreation.”

Many of the safety upgrades are providing a more welcoming experience and universal accessibility at major access points along the trail, including regrading of steep locations, and the addition of gently sloped entrance ramps.

The Wallkill Valley Rail Trail improvement project was managed by OSI in partnership with WVLT and was funded by OSI-secured grants from the New York State Environmental Protection Fund (EPF) and the New York Office of Parks, Recreation, and Historic Preservation’s (OPRHP’s) Recreation Trails Program (RTP). Matching funds were provided by the Butler Conservation Fund and OSI. 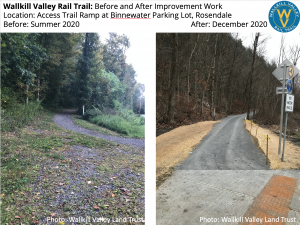 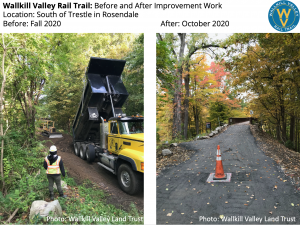 The Wallkill Valley Rail Trail is a 22+ mile trail and linear park that runs along the former Wallkill Valley railroad corridor in Ulster County, through the towns of Gardiner, New Paltz, Rosendale, and Ulster. The trail’s 10-foot-wide pathways gently meander through wooded property. Hikers, joggers, cyclists, horseback riders, and cross-country skiers use the trail, which sees more than 100,000 visitors annually. The multi-use trail is open year-round from dawn to dusk.

The northern sections of the Wallkill Valley Rail Trail are included as part in the 750-mile Empire State Trail (EST), a bike and walking pathway that will run from New York City to Canada and from Albany to Buffalo. The EST will drive economic growth and boost tourism in communities along its route.

The Open Space Institute protects scenic, natural and historic landscapes to provide public enjoyment, conserve habitat and working lands and sustain communities. Founded in 1974 to protect significant landscapes in New York State, OSI has been a partner in the protection of nearly 2.3 million acres in North America.

After partnering with WVLT to acquire the Rosendale and Ulster sections of the Wallkill Valley Rail Trail in 2009, OSI led a campaign to raise $1.5 million for structural improvements for the Trestle, turning a dilapidated railroad bridge into a regional asset. The trestle’s restoration allowed for the continuous connection of the trail between New Paltz and Kingston.

The mission of the Wallkill Valley Land Trust (WVLT) is to enhance the quality of life in Ulster County by conserving lands of scenic, agricultural, ecological, recreational, and cultural significance. The WVLT works with landowners to secure conservation easements in order to permanently protect their land from future development for the benefit of present and future generations. We connect our community to the land by providing access to open space, including the Wallkill Valley Rail Trail, educating the community on the importance of conservation, and engaging them in caring for the land we protect.

For more information about the WVLT and the Wallkill Valley Rail Trail, visit: https://wallkillvalleylt.org/