Spring is in the air, and an abundance of water and color returns to the Hudson valley. In this month’s Species Spotlight, we discuss two species known for their red markings and proximity to freshwater ponds, the Red-eared Slider (Trachemys scripta elegans) and the Red Eft, aka the Eastern Newt (Notophthalmus viridescens viridescens).

The Red-eared Slider is usually found in ponds and is originally from the Southeastern United States. They are easily identified by the red spot on each side of their neck. Extremely popular in the pet trade in the 1980s and 1990s, they have become the most widely introduced turtle worldwide. Pet owners released these long-living turtles (30+ years!) into the wild when caring for them became challenging as they grew, and now these turtles have breeding populations on every continent except Antarctica. Even though they are from North America, they are still an introduced species to New York and are listed as invasive in our region. 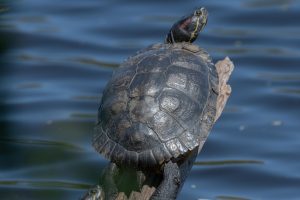 Part of their success in taking up residence in new areas is due to their eating habits — they are known as ‘opportunistic omnivores,’ meaning they can and will eat pretty much anything that fits in their mouths. This allows Red-eared Sliders to outcompete native species for food resources. They need basking sites and may compete for sunny spots as well. These turtles are also host to parasites and viral infections, which can infect and impact native populations. Both the Nyquist-Harcourt Nature Sanctuary and the Mill Brooke Preserve conservation easements host ecosystems that would be favorable for this invasive turtle to inhabit. There have not been any sightings of the Red-eared Slider in either property listed in the NY iMapInvasives online database. If you notice this species in the wild please report to NY iMapInvasives.

Red Efts are the juvenile terrestrial phase of the Eastern Newt and is native to New York. This newt spends its other life cycle phases in the water. But unlike the dark grey and brown colorings of the other phases, the 2 to 3-inch forest floor-dwelling Red Eft is bright reddish-orange, a warning sign to predators about their potential toxicity. They secrete tetrodotoxin through their skin, which is the same toxic compound found in some fish, the Blue-ringed Octopus, a few worms, and another newt — the Rough-skinned Newt. 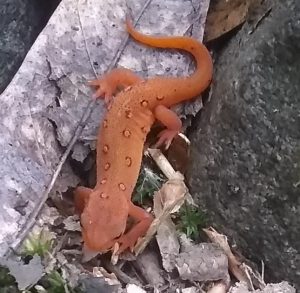 Found in the northeast, mid-Atlantic, and southeastern regions, eastern newts can live 12 to 15 years but only spend about 2 to 3 years in the red eft phase. Even though they are bright orange and red, they are surprisingly good at blending in with the leaf litter on the ground.

If you stumble across one, take a good look nearby, you may be surprised at how many you might find wandering around after a good rainfall. Red Efts are often found crossing trails in our preserves and the Wallkill Valley Rail Trail.