May 2021 Species Spotlight: The Native Snapping Turtle and the Invasive Water Chestnut

The Snapping Turtle (chelydra serpentina) has been New York State’s official state reptile after it was nominated and subsequently elected by elementary school students. Obviously, a fan favorite, these turtles can be found in lakes, ponds, rivers, streams, marshes, and even urban waterways. Their native range extends beyond New York State, includes much of North America from eastern Canada and New England to the Rockies, they are also found in pockets from Mexico and 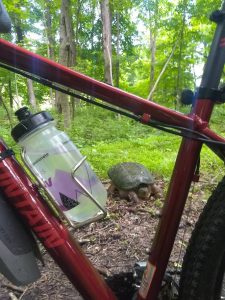 In appearance, Snapping Turtles have a large head and hooked beak, which is what enables them to snap at predators and help them consume prey. They have a tan, brown, black, or gray upper shell, which does not cover all of their limbs and tail; their shell also has bumps or ridges, that are called keels, as well as a long tail with jagged ridges. Snapping Turtles are fairly large animals and can reach anywhere between 8 to 20 inches in length and can weigh anywhere between 8 and 35 pounds.

Snapping Turtles typically reside in bodies of water that have slow moving and are shallow with a muddy bottom. In colder bodies of water, they spend time near rocks to warm up and have easy to access water from that position. Snapping Turtles are omnivores meaning they eat plants and aquatic animals, reptiles, amphibians, and mammals. During the nesting season, Snapping Turtles will make their way onto land: their preferred nesting locations are within 100-feet of the water and typically occur in sandy or loamy soils. The female will bury her eggs in the nest to help protect them from predation. However, the Snapping Turtle’s eggs are often left alone, so those are often under threat from various animals. 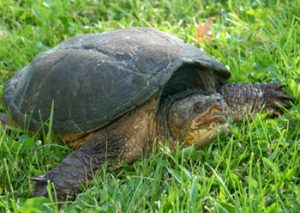 Unfortunately, one of the Snapping Turtles greatest threats is from traffic; this threat is heightened because they are nocturnal creatures and drivers have a harder time seeing their dark, low profile shells at night. However, efforts are being taken in areas to create more ideal habitats where Snapping Turtles can remain safe. If you do come across a Snapping Turtle attempting to cross a road, you can safely move the turtle in the direction it was traveling. If you do need to physically move the turtle, pick it up carefully at the back of the shell to avoid getting bitten. Never pick up a turtle by the tail as that will cause damage to the turtle. The North Carolina Zoo put together a great demonstration video on how to safely move a Snapping Turtle. You can watch that here: NC Zoo Demo: How to Move a Snapping Turtle

Snapping Turtles are often labeled aggressive, but a lot of their behavior is actually defensive: this can be seen from the way that they will avoid other things in the water. However, their bite is extremely dangerous, so it is best to be cautious if you do see them. From a reasonable and safe distance, they can be very interesting creatures to spot. Areas, such as the Mill Brook Preserve, Nyquist-Harcourt Wildlife Sanctuary, and the Wallkill Valley Rail Trail are good for spotting Snapping Turtles. You can also see them trying to cross roads that are near wetlands during mating season.

The Water Chestnut (trapa natans) is native to Europe and Africa, but was brought to the United States in the 1870s as an ornamental plant. It was introduced to many northeastern states ranging down to Virginia. It was first found as an escaped plant in Collins Lake in Scotia, N.Y. in 1884 and currently it is found in 43 counties in New York State.

The Water Chestnut can often be seen floating on the water; although, it has a submerged stem that is about 12 to 15 feet long and has roots that attach to the sediments in the water body. The floating rosettes of leaves, are triangular in shape and have saw-toothed edges and hollow air-filled stems. This four-petaled flower blooms in June and appears white. The Water Chestnut has fruit with hard nuts, which have four inch spines with barbs. Any seeds in the fruit can remain viable for 12 years. 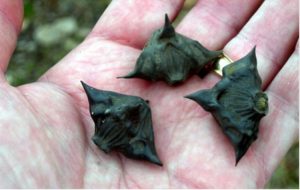 The Water Chestnut is most commonly found in ponds, lakes, wetlands, slow-moving parts of rivers, and estuaries. The plant spreads as the fruit and rosette break off from the stem and float to another area; in addition, it attaches to objects including recreational watercraft, the pads of boat trailers, and fishing equipment which can inadvertently transport the plant to a new waterbody.

Water Chestnuts have greatly affected the areas in which they have taken over. It poses a risk to people because it forms dense mats of rooted vegetation that can be very difficult to get through in a boat, kayak, canoe, or when swimming. The nuts, with their long sharp barbs, can settle on the floor of the waterbody or get washed ashore, leading to injuries when people step on them. Water Chestnuts will also affect aquatic life as they form deep mats, which block sunlight and prevents the natural aquatic plants from getting everything that they need to survive. The lack of sunlight causes food and shelter for other animals to diminish, since they rely on those plants. In addition, these deep mats affect levels of dissolved oxygen: which can become low enough to be lethal to native aquatic animals. 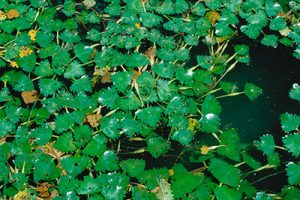 There are several ways to manage the species. One method is to hand pull the entire plant, especially rosettes, when they first appear around June or July: this is most advantageous for areas with a smaller infestation. This method can be performed by canoe or other small boat with cargo space and heavy gloves to protect from spiny fruits. To dispose of the removed plants, all portions of the plant should be hauled at least 45 feet on an upland site to dry out and die in order to avoid the spread back into the waterbody. This process would have to be repeated annually for 5 to 12 years to exhaust the seed bank. Another mechanical method of is a harvesting machine, which is beneficial for very large areas and allows for the water chestnut to be composted. Again, an area would have to be treated annually for up to 12 years in order to exhaust the seed bank. There are also chemical treatment methods could be effective; however, it would take several years of application and may kill non-target species. More research is needed investigate potential biocontrol methods.

There are also many ways that you can help stop the spread of Water Chestnuts! A good practice to employ is to clean, drain, and dry your watercraft, trailer, and equipment before and after each use. Another good practice is to dump bait bucket water where it came from or on land. If you witness a new area of infestation, take several photos and submit a report to iMapInvasives.  Finally, you can share information about the Water Chestnut with others and help educate people on stopping the spread. Currently, the Water Chestnut has not been found on any Wallkill Valley Land Trust properties, however, it is found in the Hudson River and several of its tributaries, so it is very close and important to keep an eye on these areas and report any sightings so they can be addressed as early as possible.