The Beauty and Evolution of Seven Meadows: An Interview with Gregory and Janet Abels, and Brent and Carrie Wasser

In 2011, Gregory and Janet Abels decided to create and implement a conservation easement with the Wallkill Valley Land Trust — with the help, support and encouragement of their daughter, Carrie. While they knew a little about easements, Carrie helped them get the ball rolling on creating one for their property to “keep its character and beauty.”

The preserved property is known by two names: Seven Meadows because there’s one spot where you can see all seven meadows; and the Willow Pond Sheep Farm, since it is currently used for farming sheep.

Gregory brought the property to life by describing its rich history and wildlife along with his personal experiences on the land. During the Huguenot era, when the area was first settled, he said the land was cultivated for farming. In the1860s, additional farmhouses were built on the site, and then in the 1920s, the property was used as a dairy farm. Not long after, the land’s expanded use included growing plum and apple trees, and raising horses.

Seeking a spacious place in the country to live, the Abels bought the property in 1983. Their work on the land included revitalizing the pasture, creating a pond for drainage and recreation, and leasing the fields for cattle grazing (through the persuasion of Carrie).

A key part of the conservation easement was that the property remain a farm, maintain habitat for wildlife, and be protected from commercialization. With this in mind, the Abels worked with the Wallkill Valley Land Trust to create an easement that met these requirements, and allowed them to be involved in the property in regard to maintaining its function as a farm. In regard to the property’s wildlife, Gregory is particularly pleased with the wide variety of bird species he has observed, and recalls times when wild pheasants jumped on bird feeders.

The land’s current use is for sheep farming. The Willow Pond Sheep Farm is run by Carrie and her husband Brent Wasser. Both have farming backgrounds. Carrie was an editor of a food and farming magazine and had worked on livestock farms while Brent has experience with food and farming traditions from Europe. Prior to their decision to start a sheep farm, Carrie had considered pigs or beef cattle, but was persuaded by Brent’s idea to start a dairy sheep farm instead.

Carrie describes why sheep were the perfect choice for their farm: “Sheep are remarkably sweet, peaceful creatures — and much smarter than people give them credit for. They also produce exquisite milk that is higher in fat and protein than cow or goat milk and also creamier.” 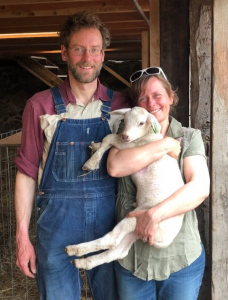 Although it’s not a certified organic farm, Carrie and Brent said they do not “use chemical or synthetic pesticides or fertilizers on our land. Instead, we encourage robust growth of the grass by applying farm-made compost to the pastures, adding natural soil amendments, and rotating our flock through the fields, taking care that they never overgraze,” they said.

In addition, they only use medicine for when their sheep are sick. They grass-feed the lambs they raise for meat and use a non-GMO grain as supplement while feeding their pasture-raised dairy sheep. Although Carrie and Brent run a lot of the property today, Gregory is involved in the property through maintenance, supervision, hiring, mowing, putting labels on yogurt bottles, and collecting chicken eggs, in addition to recreational activities. It is really a family farm!

Carrie also shared some of the upcoming projects planned for the the future. This season they are selling their sheep’s milk yogurt, as well as bottled pasteurized sheep’s milk through October. They will be selling grass fed lamb in the fall. Likewise, their new home and dairy barn should be completed, which will be the end of some of their ongoing projects in the Abels Conservation Easement, AKA Seven Meadows. Learn more about the Willow Pond Sheep Farm here.