The Gypsy Moth was renamed as the Spongy Moth in March of 2022,
and is featured in another segment of Species Spotlight that month.

Lymantria dispar moths (whose new common name is currently under discussion), formerly known as Gypsy Moths, are a hot topic in New York State this summer. Folks driving through the Catskills can witness firsthand the destruction these invasive pests have wrought on our native forests, as they have across the northeastern United States. They are now found in 19 states, and are continuing to move north through Canadian forests. 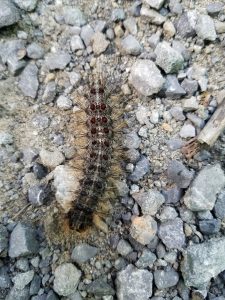 This gypsy moth caterpillar, spotted in the author’s driveway, was squished shortly after identification was confirmed with iNaturalist.

First introduced in Massachusetts in 1869, textile artisans hoped they could be cross-bred with silkworms to create a species that could survive the harsh northeastern climate. While this attempt was unsuccessful, the escaped European species was well-suited to living in our forests. The caterpillars have a huge appetite; in their seven weeks of childhood, from the time they hatch in April or May, these critters grow from a tiny egg to a 2-inch caterpillar. To do so they eat an estimated square foot of leaves per day, usually from oaks but they’ll also munch on the leaves of apples, beech, birch, elm, maples, and even evergreens in a pinch. This amount of damage doesn’t sound like much, but with up to a thousand eggs laid by each female, it quickly adds up. An Entomologist with the US Forest service estimates that between a million and 10 million acres of forest could become deforested in the next year after the 2021 summer outbreak.

Typically the caterpillars don’t cause this much defoliation every year. Their population tends to boom in a cyclical pattern, with huge spikes in damage reported 1971 and 1981. While the specific reason for particularly high numbers of caterpillars in a given year is not yet known, the damage to the native forest is highly related to stressors in the form of other pests, pollution, and drought. The recent extreme drought has inhibited the growth of some funguses that help impede the spread of these pests, and restrictions due to COVID-19 have limited the ability of forest rangers and other specialists to manage the outbreaks. 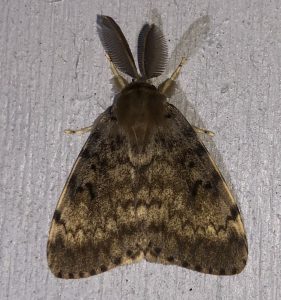 The adult gypsy moth in all its glory. (c) pmaxp, some rights reserved (CC BY-NC)

Unfortunately, most of us won’t know our trees are infested until we see the damage that is done. If you can get good at spotting egg masses, you might be able to nip the problem in the bud, so to speak, but looking for the caterpillars once the trees are defoliated won’t help much. Instead do what you can to support your trees in growing a new set of leaves by watering and fertilizing; a healthy tree can survive a full defoliation or two in a season. If the tree doesn’t leaf out again, it has likely died and it’ll be time to call your local arborist. Meanwhile, do what you can to help limit the spread. Amazingly they have expanded their range despite the fact that the females can’t fly! The tiniest caterpillars are sometimes swept up into the airstream by wind, and can disperse this way. Females are also fantastic at hiding their egg masses in places like vehicle wheel wells, picnic tables, campers, boats, and any outdoor lawn ornament. If you’re moving, make sure you inspect your lawn ornaments for hitchhikers.

To learn how to find and remove egg masses, see this video: 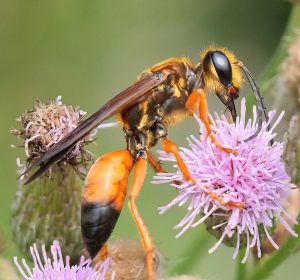 Some wasps like this Great Golden Digger Wasp (Sphex ichneumoneus) collect crickets and grasshoppers for their offspring to eat. (c) hankj, some rights reserved (CC BY-NC)

It can feel pretty hopeless watching caterpillars demolish leaves on a tree or your carefully-tended garden vegetables. I personally struggle to grow broccoli and other cabbages, because I know how disappointed I’ll be once the cabbage moths find them and their larvae chew each leaf down to the rib. Some gardeners and arborists will apply caterpillar-specific bacteria and other sprays or powders to their plants to try to protect them, but this can be hard to accomplish on a large tree or field, and they can sometimes have adverse effects on the caterpillars and other insects that gardeners don’t want to kill.

Luckily for us, we have a plethora of native (and some commercially-introduced) predatory wasps! Now I know many readers will be raising an eyebrow at the idea of rejoicing in the presence of any creature with as bad of a reputation as these seemingly ill-tempered insects of the order Hymenoptera. However, predatory wasps are hugely beneficial to farmers and gardeners across the globe.

First of all, let’s discuss how unfair their reputation has been, historically. In a 2018 article in Ecological Entomology, authors Sumner, Law and Cini discuss how our attitudes about wasps as dangerous or aggressive is based on a tiny fraction of wasp species:

“Our dislike of wasps is largely shaped by a group of wasps that represent less than 1% of the aculeate (stinging) wasps – the Vespines. These consist of 67 species of social wasps which most commonly come into contact with humans –yellowjackets (Vespula, Dolichovespula spp.) and hornets (Vespa, Provespa spp.) (Carpenter & Kojima, 1997). There are at least another 850 species of social wasps [Stenogastrinae (Carpenter & Kojima, 1996) and Polistinae (Ross & Matthews, 1991)]. However, the vast majority of wasps (an excess of 75 000 species) are solitary – these include at least 4000 species of solitary Vespidae [e.g. pollen wasps (Masarinae) and potter wasps (Eumenidae)], over 9000 species of Crabronidae, and some 5000 species of Pompilidae (Spradbery, 1973). There are at least another 650 000 species of parasitic wasps (Parasitica), many of which are undescribed (Aguiar et al., 2013); these insects are small, solitary and mostly lack a stinger and so are not largely recognised as ‘wasps’ by the public. The public’s opinion of wasps, therefore, is limited to their experience with less than 1% of this highly diverse and specious group, and more specifically a handful of species (Lester, 2018).”

So while everyone has a story about a paper wasp nest on their back porch or an unfortunate event involving an unattended soda can, most of the wasps we encounter in our daily lives care little about us. They are much more interested in feeding their babies, and predatory wasp moms choose other insects as tasty food! (And spiders, aphids, and more). Many of these wasps are actually parasitoid, meaning they themselves do not predate on other species, but instead have life cycles where their offspring consume the other species, while their parents feed on nectar and other foods. This is really important, as parasites can live with the animal they’re preying on, but parasitoids almost always kill the host. Anyone who is familiar with Tomato or Tobacco Hornworm caterpillars (Manduca spp.) has probably seen one sporting a thick coat of white pods that resemble grains of rice. These are the cocoons of a wasp (often a braconoid); the parent laid her eggs under the skin of the caterpillar, and when the eggs hatched they ate the hornworm from the inside out and spun their cocoons when they were ready to grow into adult wasps; a short while later the hornworm will die. It’s a bit gruesome, but an amazing strategy for a wasp to provide fresh food for her babies. 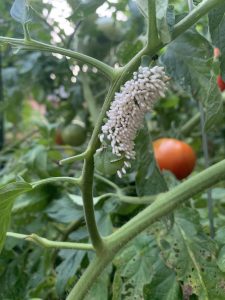 This tomato hornworm and its wasp passengers were spotted in Kingston, NY. (c) charlessturgeon, some rights reserved (CC BY-NC)

With these winged allies at our sides, our gardens, crops and homes are better protected from problematic bugs such as june bugs, Japanese beetles, cabbageworms, cabbage loopers, potato beetles, cockroaches, spiders, aphids, cucumber beetles, corn ear worms, cutworms, leaf-miners, mealybugs, sawfly larvae, squash vine borers, gall-forming insects, tent caterpillars. Some even specialize in predating invasive species like emerald ash-borers and gypsy moths. Many wasps lay their eggs on or in the eggs or larvae of these insects and let them go about their business, while others like potter wasps or yellowjackets will carry their prey away to pack up for their nestlings.

So, while I don’t expect anyone to rejoice when they discover a yellowjacket nest with their lawnmower, I hope you give these amazing insects a chance to live their lives in peace when you can. They deserve a bit of appreciation for their important roles in our backyard habitats. You can help support beneficial predatory wasps in your area by leaving some natural areas of your yard and soil undisturbed, and by planting pollinator-friendly native flowers that will help feed the adult wasps; these strategies will actually benefit all sorts of welcome insects, from bumblebees to fireflies. You can also leave a shallow dish of water out for wasps, bees, and butterflies to enjoy in the summer heat. And if nothing else, choose a clear cup to drink out of for your outdoor summer gatherings, in case any wasps have come to share!

To learn more about beneficial wasps: