During the oppressive heat of the summer, one of the refreshing things one can do is take a walk, run, or
bike ride through Rosendale where the Wallkill Valley Rail Trail passes by old mines. Several of these
openings to the former room and pillar style mines can be found along the rail trail as it passes through
Williams Lake around mile marker 17.5 and another can be found at mile marker 15.5 where the rail trail
passes along the former Joppenbergh Mountain mine which collapsed in 1899. The sensation of cool air
blowing out of the ground can be an energizing relief from the oppressive heat and is often called
natures air conditioning. 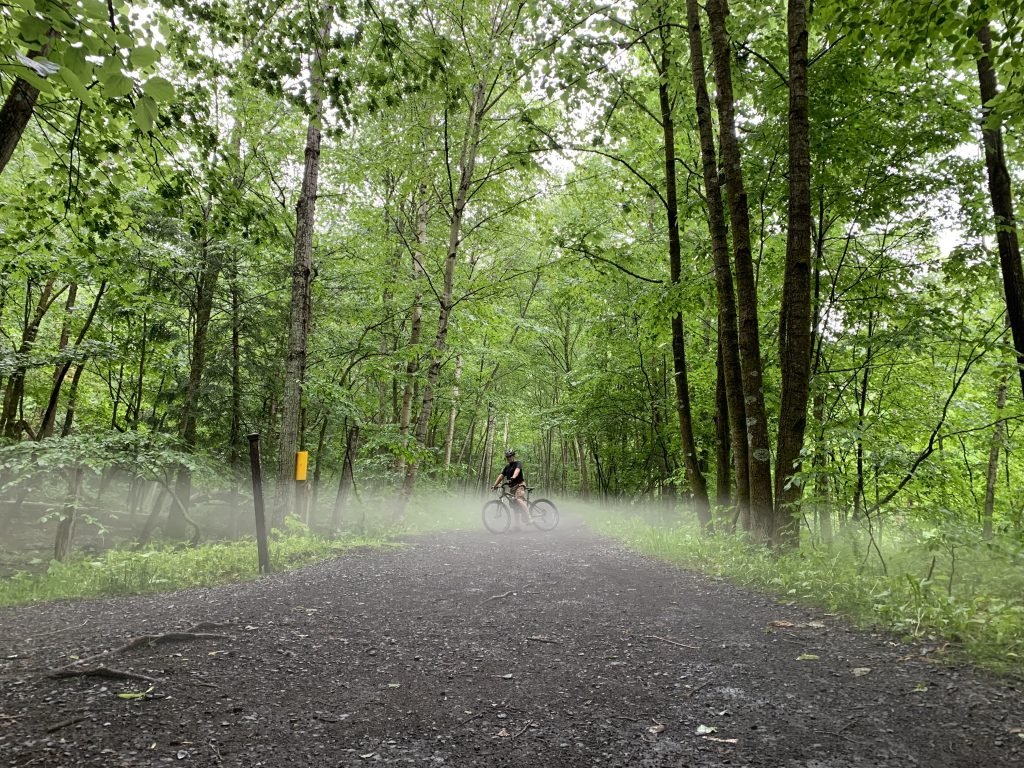 Original photo of cool, humid air condensing to fog as it exits the mine entrance near mile marker 15.5 on the WVRT. Photo C. Verofass Photography

The reason behind this natural phenomenon has to do with the insulating power of the ground. Before
we get into that, the definition of a mine vs a cave should be clarified as they should never be used
interchangeably. A mine is a human-made structure. There are several types of mines, including both
above ground and below ground methods of mining. Mines are created by humans through blasting,
digging, and chiseling to extract a certain type of rock or mineral. In Rosendale, people extracted
dolomite to manufacture the famous Rosendale Cement used around the region including the base of
the Statue of Liberty and the Brooklyn Bridge. Conversely, a cave is a natural feature. A void in limestone
or other water-soluble bedrock formed over millennia by groundwater slowly dissolving the bedrock.
This distinction is very important: mines are much more prone to collapse than caves and neither should
be explored without proper training and permissions. So, we will give credit where credit is due by only
referring to the human-made underground voids as mines and the nature-made underground voids as
caves.

Now for the fun science. The temperature in below ground spaces such as underground mines, caves, or
even your root cellar, is relatively constant – about the average annual temperature for the region.
Bedrock and soil above the space provides insulation from surface fluctuations and weather. In our area
that means below ground spaces are about 52 °F year-round. In addition to the relatively constant
temperature inside caves and underground mines, the air is also close to 100% humidity. The
consistency in temperature means during the hot summer months we feel cool air blowing out of these
underground locations. Sometimes that humidity condenses when it hits the warm dry air outside and
forms a mist around the entrance as well. Conversely during the winter seemingly warm air can be felt
near these entrances. In reality the air emerging is always close to that 52°F. The closer you get to an
opening, the more the temperature and humidity will fluctuate compared to the interior of the cave or
mine, but will be stabilized when compared to the exterior of the space. The area just inside the
entrance of caves and mines is called the twilight zone. This area experiences subdued temperature and
humidity fluctuations and only gets indirect sunlight. As a result, you can observe small shade tolerant
plants surviving long into the cold months within the twilight zones of the former mine entrances along
the rail trail.

This stability of the underground cave environment also offers scientists valuable climate information
recorded within cave sediments. As the sediment layers are deposited they include archives of
temperature within the cave and vegetation types above the cave. Paleoclimatologists can analyze these
sediments to determine the average change in temperature and vegetation through time.
So if you want to beat the heat you can head to the Wallkill Valley Rail Trail in Rosendale to stand in
front of the mines to soak up the cool air emanating from the remnants of our area’s industrial history.