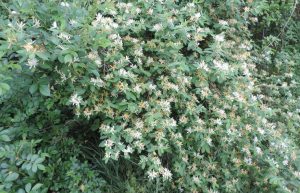 Amur or Bush Honeysuckle (Lonicera maackii) is a perennial shrub native to China, Japan, & Korea. Like many invasive plants, Amur Honeysuckle was introduced for ornamental purposes in the 19th century. This shrub has proven to be resilient and can tolerate a range of temperature, light, soil and moisture conditions. These traits made it seem an ideal candidate as a planting to prevent soil erosion and to provide food and habitat for wildlife. Widespread planting of this shrub lasted until the mid 1980’s, a span of nearly 100 years. By the end of this period, it became apparent that the plant had spread beyond the areas where it had been established for quite some time. 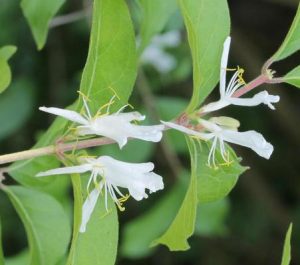 Amur honeysuckle is now established in the majority of the eastern United States, excepting Maine, Wisconsin and Florida. It occurs most often in habitats that are considered to be disturbed, such as fallow fields, roadsides, forest boundaries and floodplains. Disturbances that affect native plants provide the opportunity for this fast growing, hardy shrub to creep in and begin to establish itself. These shrubs drastically alter soil composition & shade out the understory, preventing native species from reclaiming disturbed areas and reducing biodiversity. 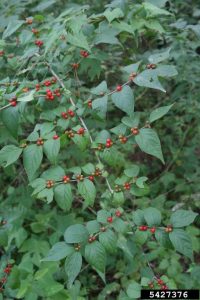 Amur Honeysuckle can grow to roughly 15′-20′ feet tall, and has tapered leaves which grow opposite one another on a hollow wooden stem. In the late summer, the plant produces white to pink tubular flowers which exude a sweet fragrance and fade to gold as the summer progresses. It produces leaves earlier in the spring and retains its leaves longer into the fall than most of our native deciduous plants – giving it a competitive advantage over those species. In autumn, the shrub develops vibrant red berries which persist throughout much of the winter. These fruits are a favorite of birds and small mammals, who spread the seeds of this plant through their droppings. 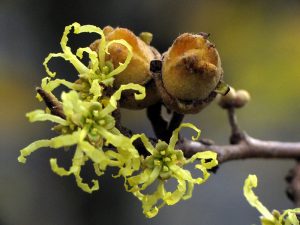 If you have taken a walk in the past several weeks, you may have noticed some shrubby trees with bright yellow, spidery blooms – highly unusual for the time of year when deciduous trees are steadily losing their foliage. Witch Hazel (Hamamelis virginiana), as it turns out, is an interesting and unusual plant in many ways. This small tree is found across the eastern half of North America from Nova Scotia to Florida. This slow growing shrub can reach heights of up to 30’, but is most commonly found between about 10 – 15’, a height at which it can dominate the understory of mature forests. 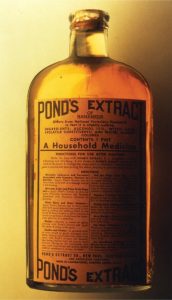 You may be most familiar with this plant from its presence in your local drug store. A distillation from the bark, twigs and leaves of witch hazel has long been marketed as a remedy for topical ailments. It was first distributed commercially in 1848 as the skin extract “Golden Treasure” but soon became the famous “Pond’s Extract” distributed by the Ponds Skincare Company we all know! Yet, it is important to note that hundreds of years prior to its commercial distribution Native Americans utilized both poultices and teas from this plant to treat infection, inflammation and fever.

Witch hazel is referred to by many different names colloquially, each one referencing one of the unusual characteristics this plant possesses. The name water-witch refers to the practice of early European settlers reportedly utilizing the forked branches of the tree as dowsing rods, relying on them to locate fresh water and other precious materials. Snapping hazelnut is a reference to their (rather shocking) method of seed dispersal. The fruit of this tree matures slowly, during the early to mid fall just as their flowers begin to bloom, the fruits ripen and split. As they split they rapidly eject two small, shiny seed pods with an audible “crack”, flinging seeds up to several yards away! Witch hazel is one of few plants that both fruits and flowers concurrently, a trait that is reflected in the genus name Hamamelis, meaning “together with fruit”. 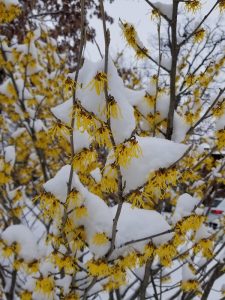 One would imagine that blooming in the colder temperatures of autumn when there are very few nectar sources available, might make this tree more attractive to traditional pollinators. However, by the time the humble witch hazel blooms many of those helpful insects are either dead or are no longer able to endure the cold temperatures to visit the plant. This makes the pollination of witch hazel a bit of a conundrum. Some sources cite that it is primarily pollinated by small flies and bees, both of which suffer negative effects from cold temperatures, and other sources report that they are pollinated primarily by night flying moths of the genus Eupsilia. The members of which are capable of thermoregulation and can fly in below-freezing temperatures. It is fitting that a plant with such interesting and mystical characteristics should be frequented by such a unique creature.

Head out on a hike this November to catch the remaining blooms of these incredible plants!

If you are interested in seeing the seed dispersal in action, click here for a video of seed pod ejection in chinese witch hazel!