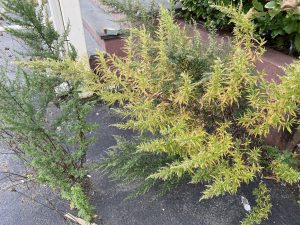 Mugwort. Few plants have gardeners like myself shaking their fists at lush fields like this one. Once you learn how to find it, you’ll notice it everywhere. On roadsides and ditches. In farmed fields and pastures. In wild meadows. On the edges of parking lots. Occasionally it tags along in potted nursery plants where inattentive gardeners may not see the rhizomes, or roots. Anywhere there is edge habitat that has been recently disturbed, this plant is just waiting for its opportunity to move in at the next gust of wind, and once it’s there it rapidly takes over.

You may recognize the genus Artemesia from flower gardening (Artemesia stelleriana) where it is one of the plants known as “Dusty Miller”. Cooks may know Artemesia dracunculus, a.k.a. the herb tarragon. Or you may recognize Artemesia absinthium or “Wormwood”, which is used to make absinthe. Even Sweet Annie (Artemesia annua) has compounds that are used in the primary treatments for malaria today. The species that we know as “Mugwort” has been used for things that are helpful to us humans as well, including to repel fleas and parasites, as well as a long list of other medicinal uses to varying degrees of efficacy. The leaves are bitter and have been used to flavor foods and beer before hops became popular. 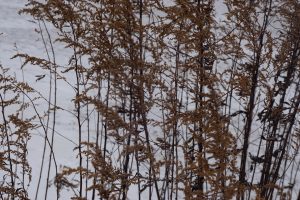 With its useful properties it’s no wonder this plant arrived from Europe and eastern Asia with early colonists to North America in the 16th century. And for all intents and purposes, it’s here to stay – it has spread across the continent and is extremely difficult to remove permanently. And one successful flower spike is enough to let mugwort gain a toe-hold in almost any area, since one plant can produce upwards of 200,000 tiny seeds that can be spread by tires, mowers, and people.

You may be wondering, why would I bring it up here? Why discuss an invasive plant that has colonized the whole region if there’s no known way to completely get rid of it? 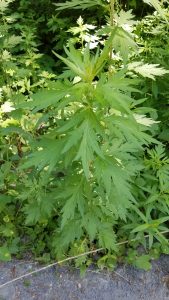 Well, because in certain circumstances it may be important to manage! If you’re working on a pollinator garden or meadow, trying to add more native wildflowers and grasses to your landscape, or even just trying to keep the edges of your driveway neat, it’s something to pay attention to. Since this plant can spread by seed but primarily by roots, it has a habit of popping up just about anywhere and then completely taking over. It grows into very woody bunches of single stems and roots so quickly it can overtake just about anything, and then shade it out by growing up to 6 feet tall while covered in its jagged, whitish-backed leaves (which remind me a bit of parsley, if parsley had a silver side). And as a wind-pollinated flower, it doesn’t have much to offer our local wildlife, and when it takes over a landscape it starves the birds and the bees of species that they need to thrive. Also of note: like with many wind-pollinated plants, mugwort pollen is one that can cause seasonal allergies. That should be enough to make anyone want to take arms against it!

If you want to give your wildlife-friendly plants a chance, the best thing to do is remove as much mugwort from the area as you can. No one method is best; it can even survive being mowed down for several years. The only trick is to be more tenacious than the mugwort, ripping out as much as possible every time you see it. I’ve managed to keep our side-yard-turned-meadow mugwort free for three years this way, so everything else gets a chance to get established. And if you decide to mow some down to let anything else have a chance, be sure to either do so before it goes to flower or make sure you clean your mower after, to prevent spreading the seeds somewhere new. It’s tough to compete with a plant this good at survival, but if you start with a small area and work your way out, you can make a difference.

While we’re focused in on fields, let’s take a look at a local critter that is quite at home there, mugwort or no! 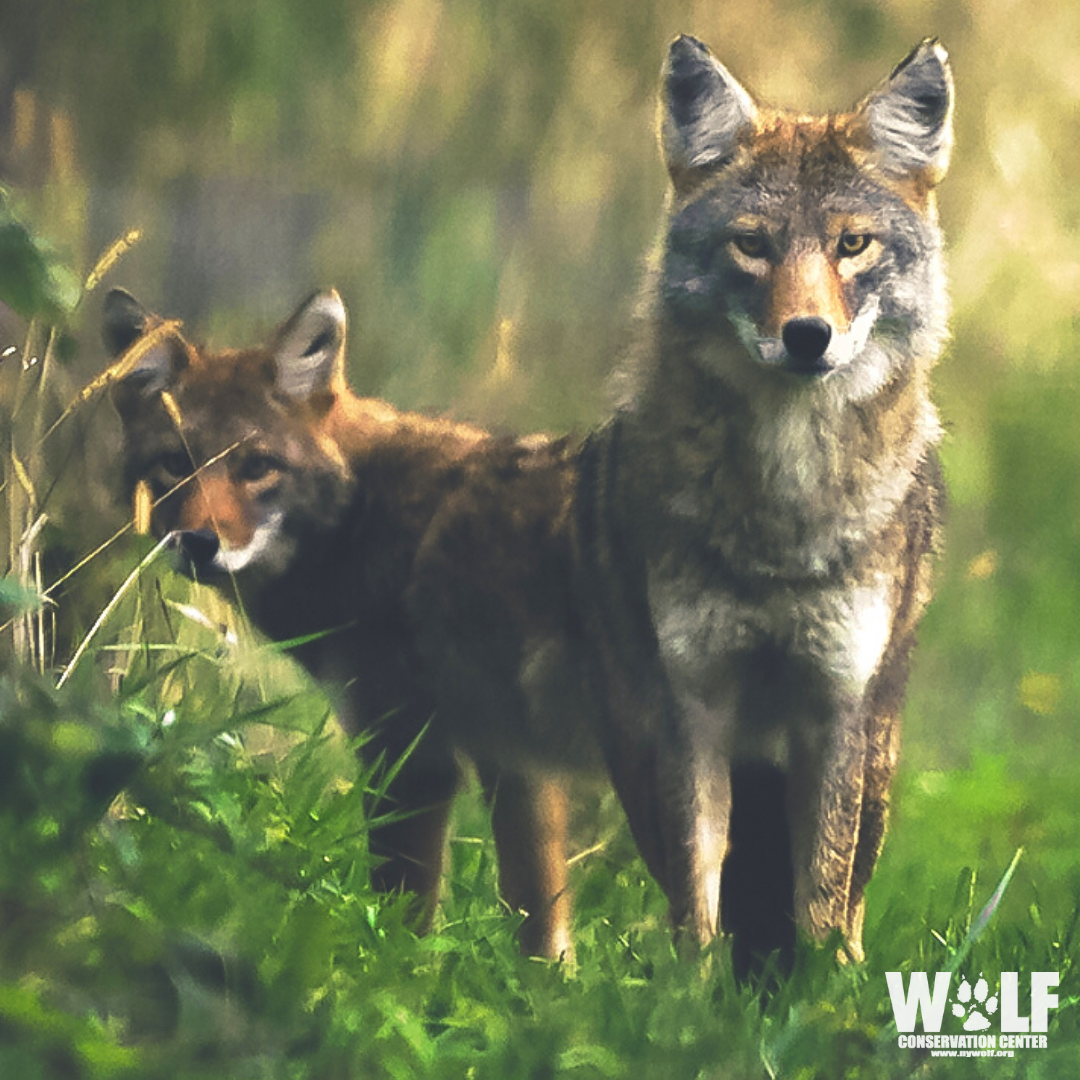 When a plant or animal can easily manage to survive and share the ever-changing world around humans, we frequently assign it one of two titles. “Invasive” (see above), or “Pest”. But what other words should we consider? “Successful”? “Thriving”, now that’s a word that doesn’t apply to many species worldwide in this time of mass extinction. Maybe “Adaptable” or “Resilient”, just as many of us have learned to be over the past few years.

The eastern coyote has been called all of these things. While they are indigenous to North America, their ancestors only moved into the northeast when colonists eradicated their biggest competition, wolves. With miles of forests, fields, and farmlands freshly available with no bigger predators to push them out, coyotes became very successful in the northeast. The subspecies that lives around us has genes from wolves and dogs too, but now for the most part they stick to groups of their own species. When big families get together they can get chatty (like a lot of human family gatherings, I’d say), and their yelping and howling can make an evening feel like it has just a bit more wildness than before.

The eastern coyote is one of those animals that everyone is certain to be an expert in, even if maybe their facts are a bit exaggerated. That doesn’t mean there aren’t neat things to learn about this relatively common species!

Did you know that in addition to eating meat, coyotes spend their summers munching on insects, plants, and berries?

Did you know that the eastern coyote, while larger than the western subspecies, are still typically only 20 to 45 pounds? That’s about the size of a border collie or a cattle dog!

Did you know that in addition to farms and fields, coyotes have been known to live in the Bronx and Queens?

Did you know that coyotes help keep the ecosystem tidy and free of disease by eating roadkill and other carcasses?

Did you know that coyotes are monogamous and mate for life?

While they get blamed for all sorts of scary phenomenon and many people are nervous of all of our local predators, it’s important to remember that they are just doing what works well for them to survive. After all, we moved (and continue to move) into their spaces. But, coexisting with coyotes is possible!

To learn how, please join us and bring your questions for Dana Goin of the Wolf Conservation Center for our virtual program on February 22. As a Wildlife Outreach Specialist, she will help our community better understand the behavior and benefits of the eastern coyote, empower us with tools, information and resources to coexist with these amazing and misunderstood animals. 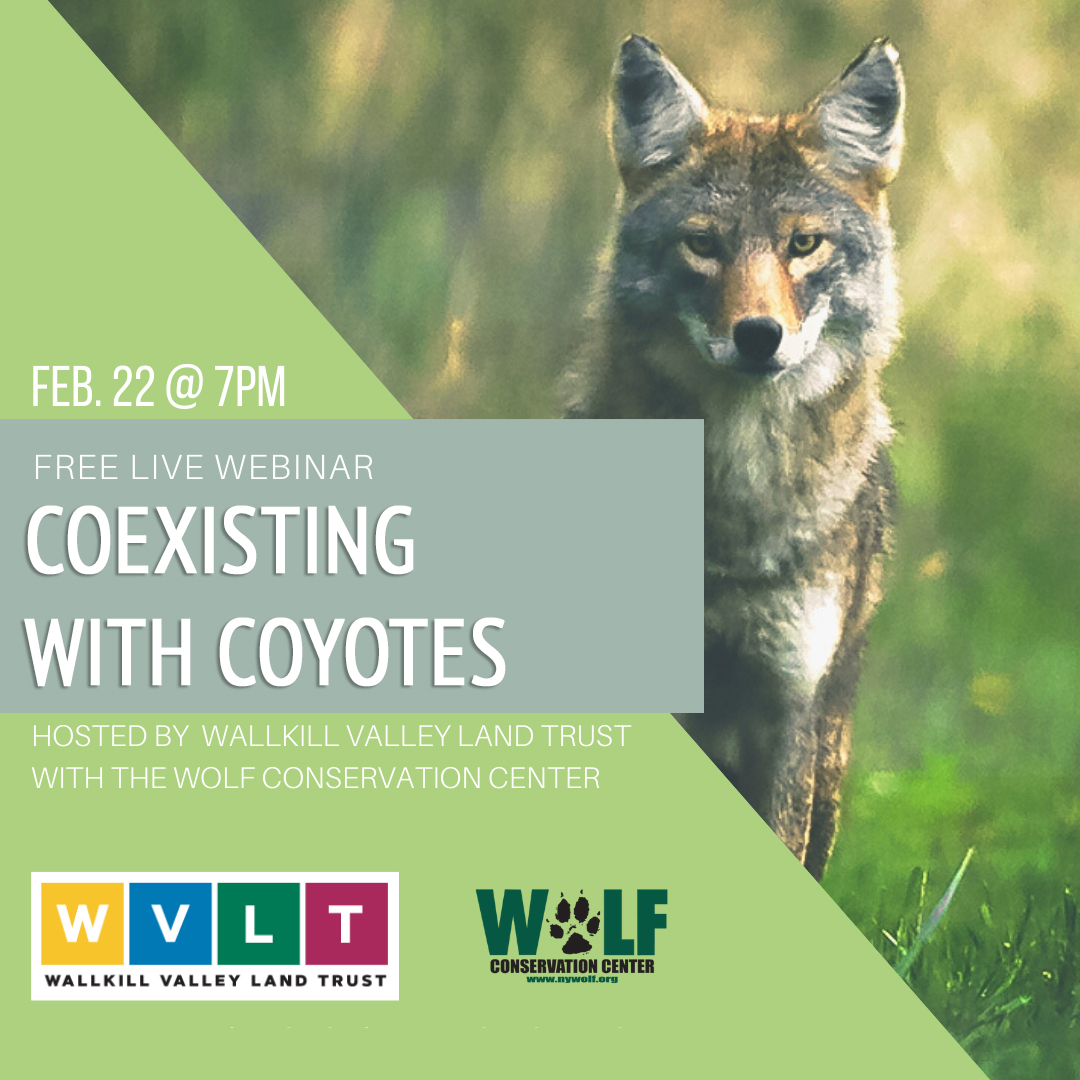 If you can’t attend, the recording and resources will be available too!

Be proactive – how to coexist with coyotes:
https://nywolf.org/learn-eastern-coyote-coexist/