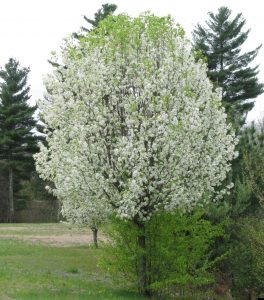 The Bradford Pear (or Callery Pear) tree was heavily favored as an ornamental planting starting in the 1960’s but the path which brought it to American soil stretches back much further. This deciduous tree is native to China and Vietnam, but seeds were brought over and planted in the early 1900’s by the Foreign Seed and Plant Introduction Office of the USDA. Around the same time, a bacterial disease known as the Fire Blight was rapidly sickening valuable orchards of the French pear tree (Pyrus communis) across a large swath of the northwestern United States. This prompted a desire to search for hardier variations of this fruit tree in other parts of the world.

One botanical explorer in particular, Frank N. Meyer (an interesting character in his own right – and for whom the Meyer lemon is named) was thoroughly impressed by the apparent hardiness of P.calleryana, particularly its ability to grow in almost any conditions. Seeds were brought back and planted at USDA test sites on the east and west coast in 1918, but it wasn’t until the 1950’s that it was eyed for use in landscaping. A hardy cultivar was produced and dubbed the “Bradford Pear”. Planted on its own, Bradford pear and other cultivars are sterile, they do not have the ability to self-pollinate and therefore cannot self-seed. New trees are produced by grafting cuttings onto fertile P. calleryana rootstock. 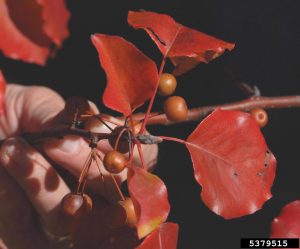 This cultivar, which became commercially available in 1961, is an early spring bloomer, with bunches of lovely white flowers and attractive red leaves that persist into the late fall. Over the next two decades it became one of the most widely planted ornamental trees in the southern and western United States. Their popularity spawned several other cultivars based on Chinese seed stock like “Whitehouse” “Autumn Blaze” and “Capital”. 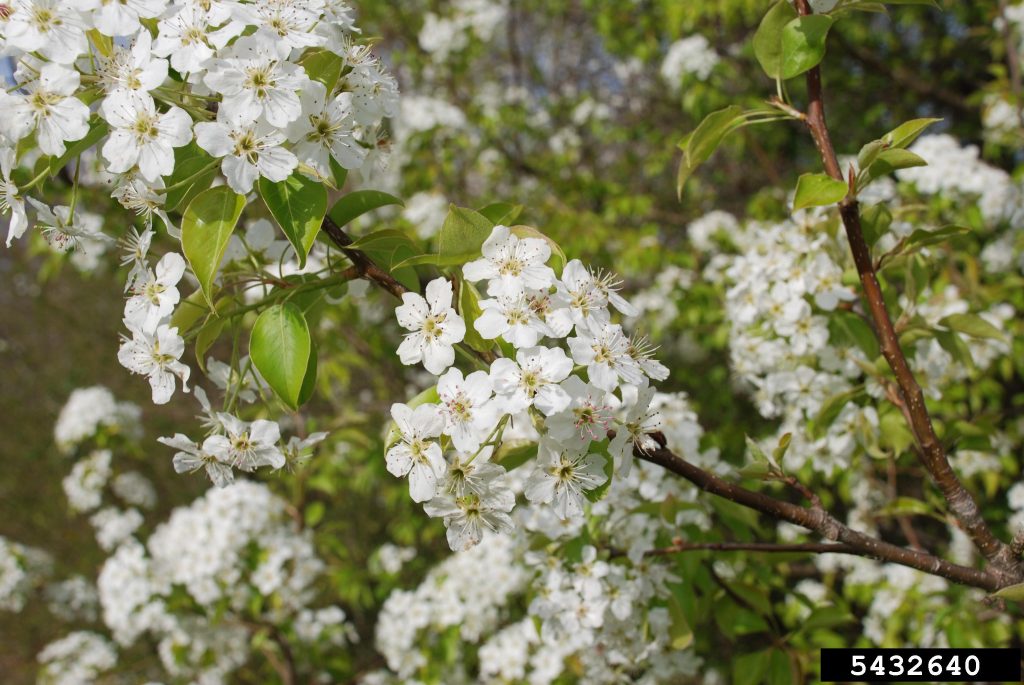 On the surface this tree seems to be ideal for landscaping, but negative aspects to widespread planting soon became apparent. On the less severe side, people soon realized that although the flowers are pretty, they release a rather unpleasant “rotten fish” smell (have also read descriptions likening the scent to a “gym locker” and “sweaty socks” amongst more colorful comparisons). On a more serious note, it was discovered that these large trees tend to split. This trait, in a tree which was commonly planted along highways and in residential neighborhoods and can reach heights and widths of up to 50 and 30 feet respectively, is a major problem.

It wasn’t until nearly 30 years later that the largest issue with P.calleryana and its cultivars was discovered, its ability to spread rapidly. Although, on their own, these trees are incapable of self-seeding, when planted in proximity to a different cultivar of P. calleryana, they can cross pollinate and bear fruit. If the sterile crown of the tree is damaged, but the fertile rootstock survives, the trees will also be able to produce fertile fruit – an occurrence that is not uncommon, due to the weak nature of the crown itself. Ironically, those very traits for which it was prized for ornamental use, its hardiness, copious flowers and fast growth, are the same traits which make it such a successful invader (Culley, Hardiman 2007). When it truly begins to dominate an area, it forms thorny, compact thickets that are impossible to penetrate, and the fruits are a reputed favorite of the invasive European starling – also the main distributor of their seeds. No wonder Southern Living has dubbed Bradford pear “the worst tree ever” (Youtube: Why Bradford Pears are the Worst Tree, Southern Living: I Just Hate Bradford Pear).

Although this species is not present in every county in New York State, there are reports of it along the Hudson River from New York City to Saratoga. Despite the proven potential for this plant seeding out into natural areas, it is unfortunately still permitted to be purchased and used as an ornamental planting in NYS. The story of Bradford pear is a cautionary tale, although for decades this plant seemed to be a relatively harmless and beautiful tree, it has proven to be highly invasive, difficult to control and remove. It is a reminder for all of us to do research before planting, and to prioritize native plantings in our home gardens.

Read about one such alternative, the beautiful and native flowering dogwood below!

If you identify a Bradford pear tree, be sure to report it using IMapInvasives! Always double check your plant ID and take a photo to be certain. For more info on identifying this plant check out the references at the bottom of this page. 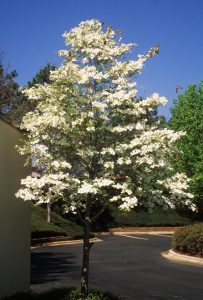 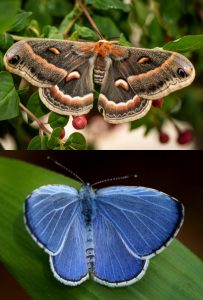 This native tree grows to be between 20-40 ft tall, has a spread of up to 25 feet and is often considered to be one of the most beautiful of the native flowering trees. On the surface, the flowering dogwood sounds very similar to Bradford pear. It is a deciduous tree with beautiful, white to pink early spring blooms that persist on the branch, and in the fall it has vibrant red foliage. However, it differs in several important ways. The blooms themselves are attractive to pollinators and the tree acts as a larval host for one of the most striking moths found in North America, the Cecropia moth (Hylaphora cecropia), as well as a true harbinger of spring, the spring azure butterfly (Celastrina ladon).

The vibrant red fruits of this tree are an important food source for a number of native birds and small mammals. In particular, the American robin, pileated woodpecker, red headed woodpecker, chipmunk, beaver, white tailed deer (& many more) will seek out the fruit. In the wild, this tree is often found in the understory of coniferous and hardwood forests in eastern North America. Flowering dogwood can tolerate full sun with an adequate water supply, but it truly thrives in dry, well-drained soil in partial shade. 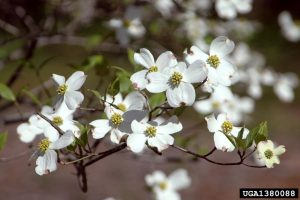 The beautiful blooms of the flowering dogwood. (Chris Evans, University of Illinois, Bugwood.org)

Unlike the Bradford pear, which tends to break under stress or high winds, the flowering dogwood has a reputation for its strength and wind resistance (something to consider as we continue to face the realities of climate change.) In fact, the hardwood of this tree is prized by artisans for its shock resistance and durability, and it has a plethora of fascinating historic uses. Native Americans utilized different parts of the tree for a variety of medicinal purposes, from treating malaria and fevers, to the cleaning of teeth. It was used widely throughout the civil war as a malaria treatment in place of quinine, which was more difficult to procure, and was also renowned for its use in the creation of weaving shuttles.

If you are looking for a long lived ornamental tree that will attract pollinators and birds to your yard, consider flowering dogwood!