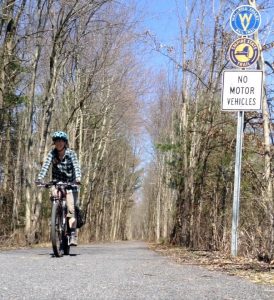 Cara Gentry uses the WVRT to commute from her home in Kingston to the Wallkill Valley Land Trust office in New Paltz.

About once a week, during the warmer months of the year, Cara gets on her bicycle and rides to work on the Wallkill Valley Rail Trail. Her commute can take up to an hour and a half one way, but to her, it’s worth every minute.

Cara isn’t the only person who uses the Rail Trail to commute—there are plenty of others, mostly cyclists, who use it for the same purpose. Whether it be for work, school, attending local events, or going to community facilities, the Rail Trail is their preferred method of getting from point A to point B for a wide range of reasons.

For Cara, one of the biggest draws to commute via the Rail Trail is the peacefulness of nature. “I just really enjoy getting outside,” she says. “I can be out in nature while commuting instead of stuck in a car.” With its tall trees, wildlife, and meandering streams, the Rail Trail can seem like a world of its own compared to the cities and busy roads that are sometimes only a few blocks away. It’s a welcome escape from the bustle of daily life for commuters and recreational users alike. Cara also loves being able to exercise out in nature. “I’d much rather be out on the Rail Trail than in a stuffy gym,” she says.

Gordana, another cyclist, finds commuting on the Rail Trail relaxing. “There’s something about being separate from the cars,” she says, “that really makes you feel relaxed, and you kind of enjoy your way all the way. You can meditate.” For Gordana, commuting can be a time for introspection. She can disconnect and take a break in a way that she wouldn’t be able to if she was driving. In those moments, there is nothing else she needs to do besides pedal.

Commuting on the Rail Trail isn’t only about solitude, though. Occasionally, when their schedules align, Cara and Gordana commute together. They start in Kingston, where they live, then ride South to their respective workplaces. Despite her love for the peace and quiet of her commute, Gordana says some of her favorite memories of commuting were with Cara. For her, nature is just as beautiful alone as it is with friends.

Andy, who rides his bicycle to work from Esopus, has another reason for commuting this way. He loves the sense of history he gets from traveling on the Rail Trail, and he’s interested in the historical significance of its surroundings, like the old stone structures near Williams Lake in Rosendale. He says, “We live in this nexus of nature and history and community, and biking by some of those structures, whether it’s an old sign for the railroad that used to be there, or some old structures that used to be involved in the cement industry, are a testament to the past.” The Hudson Valley has a long history, stretching back to colonial times when settlers first arrived, and then much farther back through the period when indigenous people lived on the land without European influence. The Rail Trail goes by many remnants of this past, and it’s one of the reasons why Andy continues to spend some of his mornings and early evenings commuting on the trail.

The people who use the Rail Trail to commute do it primarily because they love it, but also for practical reasons. The biggest of these reasons is minimizing pollution and greenhouse gasses. Riding a bicycle to work a few times a week might not seem like much, but the numbers add up. “Just 20% of the time, 20% of the working days for the half a year or so, is an environmental benefit,” Andy says. For someone like Andy, who started biking to work around 2016, that’s a lot of time off the road. Individual actions are no replacement for reforms by large corporations, but they can still be meaningful.

Another practical reason for commuting on the Rail Trail is safety, which is something especially important to Gordana. The Rail Trail is separate from the road, but many other places only have bike lanes, shoulders, or nothing at all. “You just have one line of paint that separates you from the cars, and that doesn’t make you feel good,” she says. “It’s a little bit stressful.” Before moving to Kingston, Gordana lived in big cities where she could easily ride her bicycle, walk, or take public transportation rather than drive, but the lack of infrastructure in the Hudson Valley makes her worry about her safety when road biking. The Rail Trail is a safe, easy way for her to commute, and she thinks nearby towns should build more infrastructure for cyclists.

After reading these experiences, commuting via Rail Trail might seem like an idyllic alternative to driving, but unfortunately there are some drawbacks. The biggest issue is the amount of time spent commuting, which is on average one to two hours one-way for the cyclists surveyed. The longer commute also means an earlier wake up time. Another difficulty is the weather, which can start out nice in the morning and then get worse in the afternoon—almost everyone mentioned getting caught out in the rain at least once. There’s also the physical exertion involved, which can mean showing up to work sweaty. “It’s great, but sometimes I reach those moments like, what am I doing? It’s like 7:30 in the morning!” Andy says.

Despite these issues, all the cyclists we spoke to highly recommend commuting on the Rail Trail, and they have some tips to make it easier. “It may seem daunting, and it may seem like a lot, but if you take it in baby steps, it’s not so bad,” Andy reassures.

Mark, a former commuter who loved biking to work but changed jobs, recommends doing a dry run on a weekend to see how long your commute will take. He also suggests finding a place to shower near work, like Planet Fitness, or using body wipes if your commute is long or strenuous. Having the right gear, like a rain jacket and comfortable clothing, is important too. He also recommends bringing a repair kit just in case. Some tips from the other cyclists include bringing a bicycle lock, having a basket or luggage rack, bringing water, and having a bicycle with wider tires.

If you’re interested in commuting on the rail trail, Gordana says to just go for it. “I would absolutely recommend it to everybody,” she says. Overall, people that commute on the Rail Trail say that it’s a great experience. Cara remembers one specific commute when she encountered a large turtle, about a foot and a half long and ancient-looking, in the middle of the trail. That’s not something you see every morning!

These experiences wouldn’t be possible without the Wallkill Valley Land Trust, the organization that maintains the Rail Trail. The recent renovations, as well as daily upkeep, are all thanks to the organization. “We can’t take the Rail Trail for granted,” Andy says. “We’re really lucky that we’ve had the Wallkill Valley Land Trust to take care of it. And, you know, it’s important to support that organization so that the trail can be supported and cared for in the future.” The Rail Trail is a valuable resource, not just for commuters but for the entire community—runners, casual walkers, horseback riders, cyclists, families, friends, people who need a break from the stress of their daily lives, people who want a safer alternative to busy roads and narrow shoulders, and many others. For anyone who wants to go out and enjoy nature, the Wallkill Valley Rail Trail is the place to be.