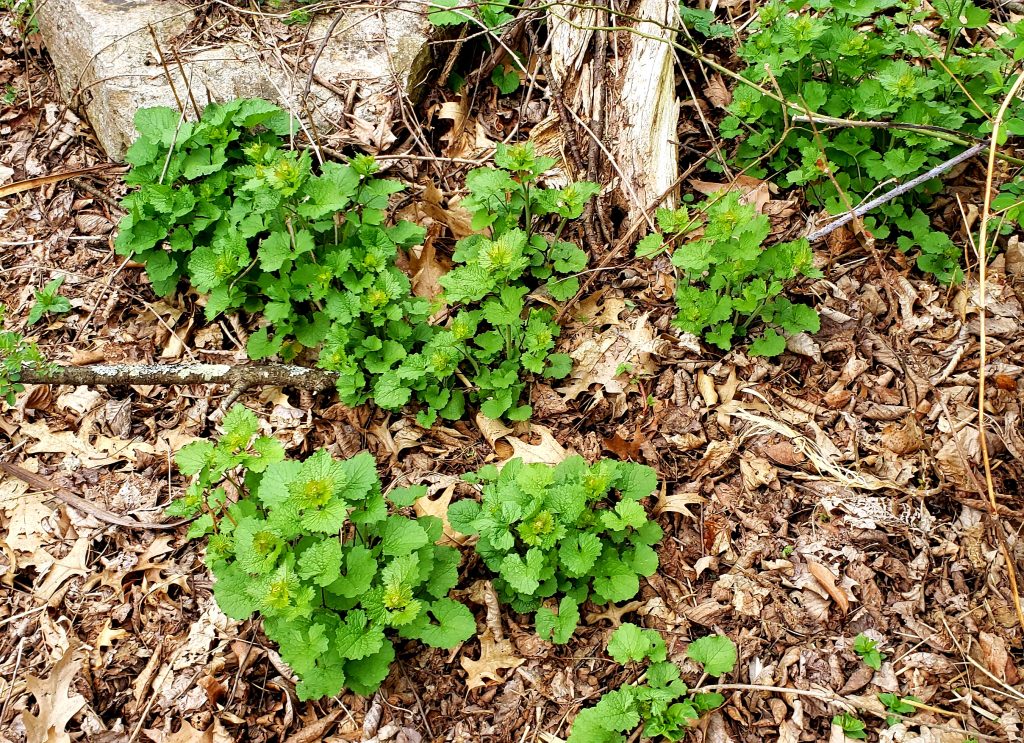 Garlic mustard in its first year of growth.

Garlic mustard is a much discussed and hated perennial herb. The first known report of it growing in the USA is from 1868 on Long Island in New York State. It is native to Europe & Asia and known colloquially by a variety of charming names like Jack in the Hedge & Poor Man’s Mustard. When the leaves are crushed or chopped, they have a pungent garlic smell.

Garlic mustard is especially harmful to native ecosystems. In its first year of development, it forms a low rosette that is easily overlooked and sometimes mistaken for other low growing plants of the understory, like wild ginger. It isn’t until its second year of development that distinct features emerge which make it easier to identify, like the tapering of its leaves into a more triangular shape and the emergence of four petaled white flowers that persist from April to early June.

If plants are not identified and removed before they have a chance to flower and develop seeds, it is very likely that these self-pollinating plants will begin to spread in the area. A healthy mature plant generally produces roughly 600 seeds on average, but particularly robust plants can produce over 7000 in one season (although this is rare). Garlic mustard often grows along highly trafficked trails – or in border terrain that is often frequented by humans and wildlife. Its tendency to grow in such places guarantees that its small seeds will be distributed by people and animals. The seeds themselves generally germinate within about two years but can remain viable for up to five. 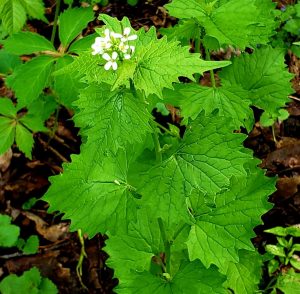 Garlic mustard begins to flower and produce seeds in the second year.

Once garlic mustard is established in an area, it spreads quickly and (like many damaging invasive plants) has the tendency to form dense stands. The development of these stands is related to major decreases in biodiversity, particularly in the understory of forests. Garlic mustard also secretes harmful chemical compounds that restrict the growth of other plant species. These compounds may also alter the fungal composition of the soil, which can damage beneficial plant/fungi relationships.

Although there has not been enough research to confirm the overall effect this plant may have on the forest ecosystem, there is some indication that it may affect amphibians and mollusks like salamanders and snails – who are so often the first victims of environmental change. It is possible that the harmful compounds released by these plants may also alter the distribution of trees over time, as they affect certain seedlings more than others. Unfortunately, there is not enough research to predict how extensive the resulting ecological changes may be at this time.

But wait! Luckily there is one useful thing about this invasive herb . . . it is edible and happens to be delicious (in fact it is featured in a recipe in this month’s Foragers and Herbalists column!) Check out the recipe for Pansotti with Stinging Nettle and Garlic Mustard by clicking here! The leaves are reputed to have the best flavor in mid spring, but some report that those grown in full shade are ideal. If you decide to harvest garlic mustard, always be sure to double check that you have the correct plant by crushing the leaves to ascertain if they have that signature garlic smell, and by cross referencing their appearance with reputable source photographs. When you harvest – be sure to pull the plant up by the roots so it will not return the following season.

Want to report an infestation? Click here to do so using iMapInvasives.

* It is also important to note that this plant does contain trace amounts of cyanide – but sources note that many of our commonly eaten vegetables like broccoli and kale do as well. Limiting consumption to a few times a month should be just fine.

*Note that the stem, leaves and seeds of mayapple are highly toxic to humans. 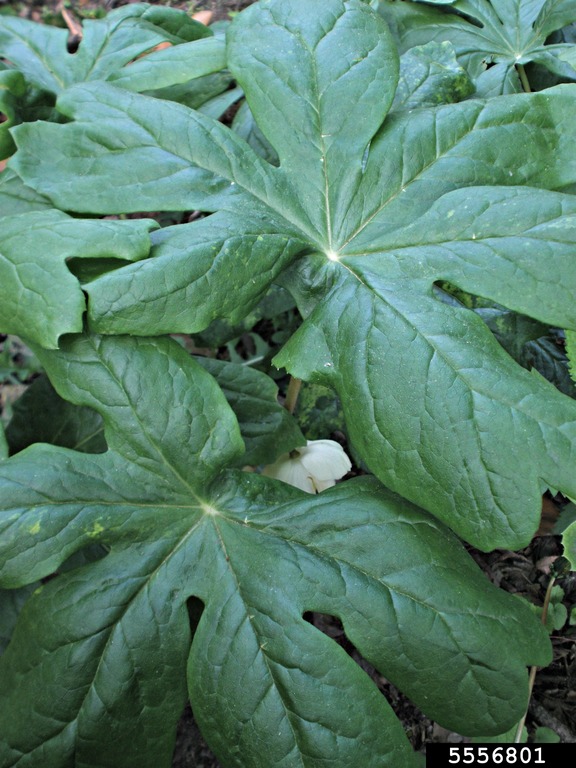 Mayapple is a low growing perennial herb that is native to much of the eastern half of North America. It has a variety of common names, but my personal favorites are “duck’s foot” and “raccoonberry”. It forms colonies that extend from a shallow and slow growing rhizome (or root) beneath the soil surface. It is most often found in the understory of open forests, in roadside ditches, and in in moist soil alongside riverbanks and ponds.

The visible aspect of this plant consists of a stem, which emerges from a root bud in the early spring and is topped with two (on occasion just one) drooping leaves that resemble an umbrella. As the stem reaches between 12-18 inches, the leaves unfurl (or the umbrella opens) revealing the lobes of each leaf. All parts of this plant, except for the fruit, contain a compound, podophyllotoxin, that is extremely toxic to humans. However, it has been used medicinally by Native Americans for centuries and more recently in a variety of prescription drugs. Derivatives of podophyllotoxin have antimicrobial, anti-inflammatory, cholesterol inhibiting, pain reducing, antioxidative and insecticidal properties. They have also been used to treat certain types of cancer, and as a treatment for COVID 19.

Mayapple is an unusual looking plant. The tall stem forks near the top as it extends toward each leaf, it is at this divergence that a single bud will form, eventually developing into a large, lovely white to pink flower. Mayapple flowers bloom between April and May and are visited mostly by long tongued bees. Collectively, these plants form a dense floor of leaves when viewed from above – which typically hides these flowers from view. 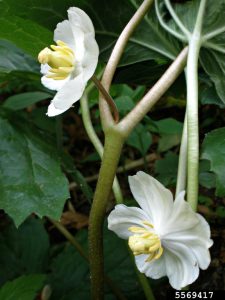 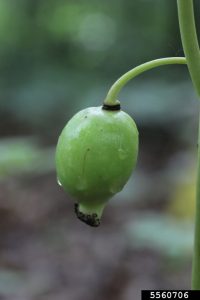 In the early summer these blooms begin developing into small fruits that look a bit like a lemon and fully ripen by mid to late summer. The fruits have been described as tasting like a cross between a paw-paw fruit (a native NY tree!) and a banana. They are most often used in jellies and jams. Note that the fruits, but not the seeds are edible, and the fruits are can only be eaten when fully ripe. In the wild the fruits are often consumed by box turtles and small mammals like raccoons and mice!