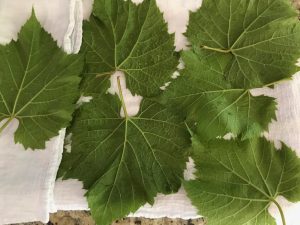 When John Le Carre coined the phrase “ the constant gardener” as the title for his  2001 political thriller, he perfectly captured the essence of nurture and attention  gardening entails, especially to keep encroaching invasive species or unwanted  plants and weeds at bay. Among the tasks I do every year is to check for wild  grapevines and cut them back where they threaten to invade flower beds or  overwhelm shrubs and trees. Several years ago, while taking out my aggressions by  pulling up vines growing around my native dogwoods, it occurred to me that the  vines’ lovely large green leaves could make awesome dolmades, the stuffed cigar shaped dish popular in Greece and Turkey. 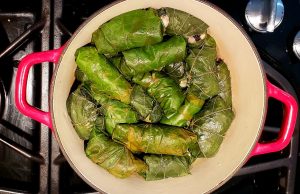 Stuffed grape and cabbage leaf dishes are popular throughout the Balkans,  Caucasus and Eastern Mediterranean, but particularly renown in Greece (where the  stuffed vine leaves are called “dolmades” or “dolmathes,” as the “d” is pronounced  like a soft “th” sound) and Turkey, where they are called “dolmas” (which means  something stuffed or filled). The filling can be seasoned rice and herbs, or a mixture  of meat and rice, and served either at room temperature or warm. You can often find  dolmades at the local Greek-owned diners or Greek restaurants throughout the  Hudson Valley, where they are customarily made with preserved brined vine leaves  from a jar or can. Made with fresh grapevine leaves, dolmades have a more delicate  flavor that allows the filling to take center stage. And foraging for the leaves makes  the dish even more fun to make!

Field Notes last discussed native grape vines in September of last year in the Species Spotlight. There are several species (Vitis spp.) native to our area which, nevertheless, can be invasive if not controlled. The photographs in that article show  how to identify the grape vines by the leaf’s maple-like shape and the tendrils by  which the vine attaches to tree and shrub branches and fences, which distinguish  them from other trailing vines such as porcelain berry or Virginia creeper. Once you  can identify the vines you will notice them everywhere. Midsummer is a great time to  pick the leaves, before the grapes ripen and the leaves start to brown off or be attacked by insects. As with any foraging, know your source so you are safely  picking pesticide-free leaves. Go early in the morning and pick the best large  specimens, about the size of your palm with their stems attached, and if you don’t  plan on using them the same day, freeze them as described below until you are  ready to cook up a batch. 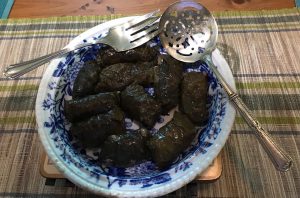 This recipe is for a meat and rice stuffing and is adapted from a recipe by, and in  consultation with, Chef Suzanne Hunter of Cuisine by Suzanne in Seattle (full disclosure, Suzanne is my sister). The recipe makes approximately 30-34 rolls. While  traditionally made with ground lamb, that is not always available at local  supermarkets (certainly not during the pandemic), and some may find the lamb flavor  too strong. So when developing this recipe I tried ground turkey, which marries well  with the other ingredients and highlights the flavors of the herbs and spices used. I  have also made it with lamb, which results in a more traditional Mediterranean flavor,  and with ground beef, which also works as a substitute.

Pick about 34 large (about the size of your palm), unblemished grape leaves for  stuffing, plus extra leaves to line the bottom of the pot in which the stuffed dolmades  will be cooked. Pick them with their stems attached as this enables you to easily pick  them up by their stems (which will be snipped off later when you are ready to stuff  them). If you are not using the leaves that day, wash them in cool water and lay  them on a clean kitchen towel and pat dry, then layer them between wax or freezer  paper and freeze them in a large baggie until ready to use. At that time, take them  out of the freezer and let them thaw.

If using the leaves fresh, wash them in cool water and then blanch them in a pot of  unsalted boiling water for a minute or so until they are fully softened, then remove  and shock them in very cold ice water to stop their cooking. Lay them out on a large  kitchen towel and pat dry.

Once frozen, the thawed leaves do not need blanching, as freezing will have served  the same function of softening the leaves (the frozen water crystals will cut through  the plant cell walls).

For the stuffing mixture:

Blend all of these ingredients together in a bowl.

*If you cannot find Ras al Hanout, you can substitute a mixture of ground coriander,  cumin, allspice, paprika and a pinch of cinnamon, which can approximate the warmth  of the Moroccan spice blend. Allspice has a strong flavor profile, so you may want to taste the spice mixture before adding them to the meat and rice mixture.

For the cooking pot:

For the dipping sauce: