Milkweed is a native plant that many people know as the host plant for the monarch butterfly. Monarchs lay their eggs on milkweeds, and the caterpillars feed on the plant upon hatching. Milkweed plants contain a milky white latex that exudes from broken stems and leaves. This sap contains compounds called cardiac glycosides, which are toxic to most animals and insects. Monarchs however have co-evolved with milkweed and can not only consume milkweed but can also utilize these compounds in their own defense by storing cardiac glycosides in their own tissues, making them toxic to predators.

The species people are probably most familiar with is common milkweed (Asclepias syriaca). The genus name Asclepias comes from Asklepios, the Greek god of medicine. Traditionally, milkweed species have been used to treat lung diseases, pleurisy, and for wart removal. Common milkweed thrives in full sun, and can be seen flowering in fields and along roadsides from June to August. Milkweed has a distinctive star-shaped flower that grows in clusters. After flowering, milkweeds form large, green, spiky seed pods, that when matured, split open to reveal dozens of fluffy, white, wind dispersed seeds. Milkweed seeds are commonly available for purchase as well. Gardeners often plant milkweed both to display their beautiful flowers, and as a way to help declining populations of monarch butterflies. Over 10 species of native milkweed can be found naturally in New York. Butterfly weed is another species of native milkweed that you may be familiar with. Butterfly weed (Asclepias tuberosa) has bright orange flowers and can often be found planted in gardens to attract pollinators. Milkweed species make a great addition to any garden, and planting native species can help native pollinators and combat the spread of invasive species. 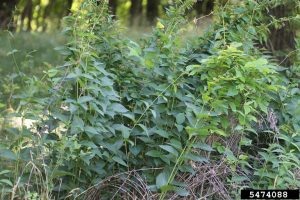 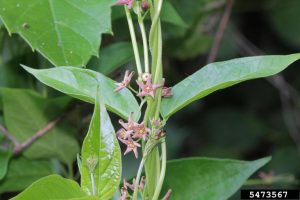 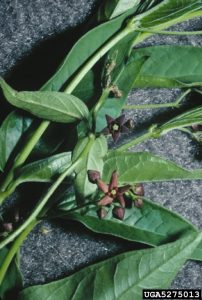 Swallowwort can grow under a wide range of light conditions and invade a number of different habitats, including pastures, gardens, hedgerows, shrubby thickets, old fields, roadsides, and mixed and deciduous forests. The dense stands formed by swallowwort can suppress native plants, impede forest regeneration, and pose threats to endangered and threatened vegetation. Swallowwort can be difficult to eradicate and is additionally able to persist in the environment because there are not any herbivores in North America that use it as a food source. Researchers across New York State have been working on a biocontrol method to help manage swallowwort populations. Invasive species are available to thrive in introduced areas when they can grow and spread unchecked without natural competitors. Biocontrol methods utilize insects from the target species’ home range for control. Researchers in New York are currently studying the effectiveness of a potential biocontrol: Hypena opulenta, a moth from Ukraine that feeds solely on swallowwort leaves. Research in New York is ongoing, though tests from 2020 showed promise, with nearly 100% defoliation of swallowwort in field testing sites. Swallowwort (or any invasive species) observations can be reported to NY iMapInvasives at https://www.nyimapinvasives.org/report-an-invasive to help researchers and land managers working to track and control the spread of invasive species.