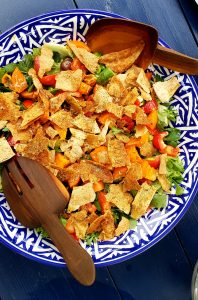 The finished Fattoush, ready to be served. By M. Witkin

Every culture has its ways of using leftover bread, the sacred staff of life, and summer bread-embellished salads are a popular means of doing so. Panzanella, the Tuscan bread and tomato salad, may be the most well-known here, but in the Middle East Fattoush is beloved. The name derives from the family of dishes known as “fattah,” which use stale or toasted pita bread as their base. What distinguishes Fattoush from a mere salad with croutons is its generous use of fresh herbs— which, traditionally, includes the tender green purslane— and its lemony sour garlicky dressing where the spice sumac takes a star turn. The actual recipe can vary depending on what is seasonally ripe, but the lettuce and herbs are often paired with cucumbers, tomatoes, and peppers, and topped with toasted pieces of pita bread. In addition to the freshness of the herbs, the dressing can make or break a fattoush salad. It should burst with vibrant flavor of citrus from the lemon and sumac, married with the the flavor of good olive oil and garlic. Sometimes pomegranate molasses is added for a touch of sweetness. In August as local tomatoes are producing at their prime, Fattoush is a perfect way of highlighting your tomato bounty. The salad can be prepped and assembled in advance, but should be dressed and tossed at the last minute to maintain the crunchiness of the toasted pita and vegetables. 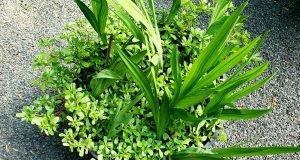 Purslane in a garden container. By M. Witkin

Many of us in the Hudson Valley know purslane (portulaca oleracea) as a pesky weed that grows up on the edges and between stones of walkways and in garden beds. The plant, a low-growing annual succulent, grows from a single taproot with stems radiating outwards; it is related to flowering portulaca, grows all over the world and is valued as an edible and highly nutritious green in Europe and the Middle East. Barrie Kavasch, in his book Native Harvests, includes several purslane recipes indicating that the plant was valued by native groups here. In recent years it has also become popular as a cultivated green available in the summer at farmers markets. As I discovered accidentally, it can be a useful companion plant (best in raised beds or pots where it can be contained) because it basically becomes a living mulch, with its mat-like radiating leaves and stems providing cover to help keep soil moist between watering. No need to worry about over harvesting, purslane is best picked by cutting off the tenderer stem ends ( about 1/3 way down from the stem tip) and leaving the rest to encourage growth. The leaves and tender stem ends can be enjoyed raw, or the full stems and leaves enjoyed briefly steamed or cooked.

As for dried sumac, that spice is enjoying a moment of culinary popularity due to its vibrant citrusy-tart flavor, dark red color and wide use in Middle Eastern and Indian cuisine. The spice is the dried ground fruits of the Rhus coriaria variety of sumac, grown widely the Mediterranean and Middle East (and known as tanner’s sumac for the leaves’ use in tanning Moroccan leather) and is related to our native staghorn sumacs, but with a more pungent flavor. It has recently become more widely (1) available in local grocery stores, or can be found in health food stores or online at sites such as nuts.com.

Ingredients
For the salad:
2 whole wheat pita rounds, split into 4 thin rounds
1 head romaine or butter lettuce, leaves torn or chopped into bite sized pieces
2/3 cup cup purslane leaves and tender stems; if the leaves are large pluck them off the stems, as for the small leaves and tender stems, they can be cut or chopped into bite sized pieces (If you cannot find purslane, you can substitute watercress or arugula or, if you have it growing wild in your garden, chickweed, which is also traditional)
1/4 cup fresh mint leaves
1/2 cup flat-leafed parsley leaves
1 medium cucumber, peeled, cut in half lengthwise and sliced into 1/4 inch thick
slices
1 red, orange or green sweet pepper, cut into 1-inch pieces
3 scallions, white and light green parts chopped (about 2/3 cup)
2-3 medium sized ripe tomatoes, sliced and cut into large cubes, or about 1.5 cups of
cherry or grape tomatoes sliced in half

Directions
1. Lightly brush the split (interior) side of each pita half with olive oil and toast them, oiled side up, on a sheet pan in the oven until lightly browned and crisp. Sprinkle lightly with ground sumac or za’atar (if you have it) and let cool. Break each half into bite-sized pieces.

2. Make the dressing. Using either a screw-top jar, or a small whisk and small bowl, add the mayonnaise, mashed garlic, lemon juice, salt, pepper and sumac and stir or whisk until blended and the dried seasonings dissolve. Then add the olive oil in a slow stream. Either whisk, or close jar and shake well, until the dressing is emulsified. [Note: If you find the dressing too sour, you can add 1/2 —1 teaspoon of pomegranate molasses to soften the flavor, but be cautious: the dressing is meant to be tangy, not sweet. If you do not have fresh mint, you can provide the mint flavor by adding a tablespoon of dried mint, crumbled between your fingers, to the dressing. ]

3. Assemble the salad on a large platter or shallow bowl with greens and herbs on the bottom, next layer on the vegetables and tomatoes, and top with the pita pieces. Five minutes before serving pour over the dressing and toss lightly to distribute the dressing evenly throughout. You can add additional salt, fresh grated pepper and sumac to taste.

1. The varieties native to our area with edible red fruits (drupes) are Rhus typhina (staghorn sumac) and Rhus glabra (smooth sumac), not to be confused with poison sumac, which grows in swampy areas and has white drupes. WVLT’s Species Spotlight discussed Staghorn sumac in July, 2020.

2. From The Cooking of the Eastern Mediterranean, HarperCollins, 1994.