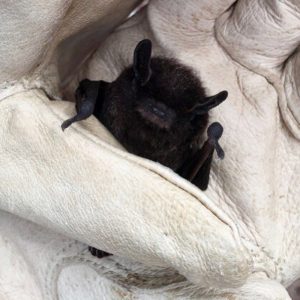 The diminutive silver haired bat can be found in forests across mainland North America from northern Mexico to southern Canada and Alaska. They belong to the order Microchiroptera, the majority of which measure under 6 inches when fully grown and subsist on a diet of insects. This order relies on the use of echolocation for flight as well as successful hunting (with an exception or two). It comes as no surprise then that these bats tend to have the oversized ears, and smaller eyes that are a trademark of this unique ability. These bats have dark brown to black fur with a streak of icy white tips along their back – a trait which inspires their name. 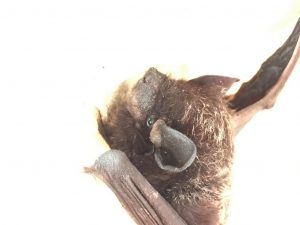 The large ears of the silver haired bat are a trademark of species that utilize echolocation. by Kim Stever

This particular bat is a member of the backyard bats club, feeding in somewhat disturbed areas despite their tendency to reside and roost primarily in old growth forests. Indeed, these bats are ten times more likely to roost in old growth forest than in disturbed or thinned forest. Highlighting the need for the preservation of forested corridors, especially amongst suburban sprawl. The silver haired bat is among the first bats to start feeding at the end of the day and as such are prime candidates for observation during the twilight of summer evenings, when lucky viewers can witness their distinctive flight as they hunt for small insects like mosquitoes, crane flies, moths, beetles and other critters. 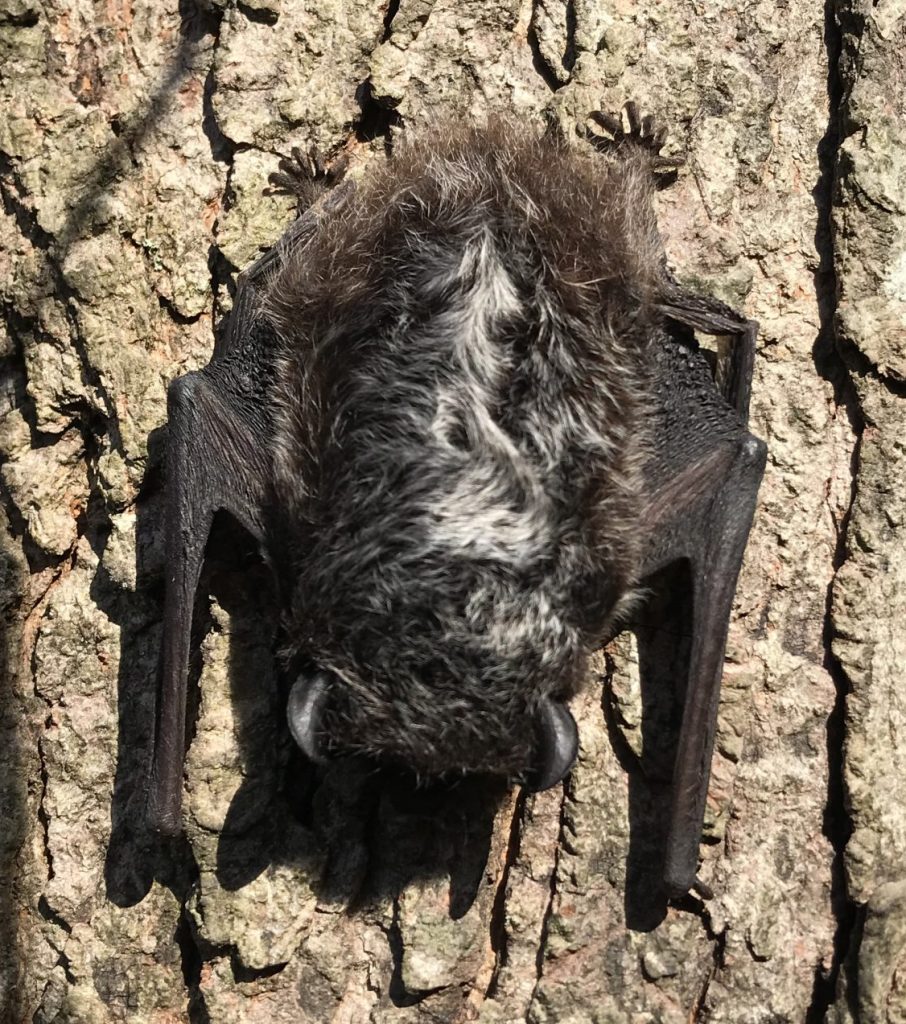 These bats tend to reproduce in the northern section of their territory during the summer months but fly further south to hibernate and mate. Females are able to store sperm over the winter, ovulate in the spring and give birth to live young in the summer (amazing)! At birth silver haired bats are tiny, pink and weigh about 2 grams but grow swiftly and are capable of flight by around 4 weeks of age. These bats generally hibernate in tree cavities or beneath the loose bark of trees, but will also use buildings, caves, and even wood piles. Silver haired bats can live up to 12 years and weigh in at just 8 to 12 grams.

Because bats are mammals, all of their bones have a human analogue. If you have children – or are a big kid yourself, check out this web page that details the differences and similarities between human, bat and bird bones!

** Please note that this silver haired bat was discovered on the ground after a severe wind storm and placed back on the tree by a licensed wildlife rehabilitator. For your own safety, always contact a licensed professional when dealing with emergency animal situations. 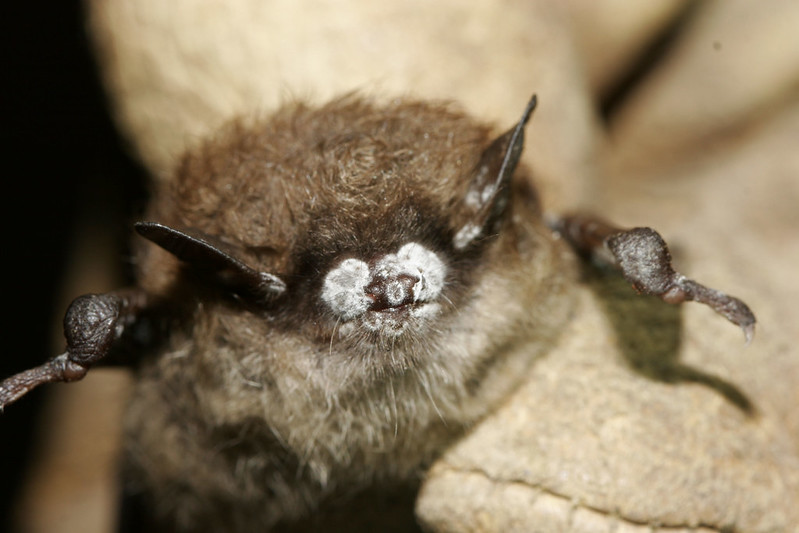 Pseudogymnoascus destructans (Pd), or White Nose Syndrome (WNS), has had a drastic effect on the hibernating bat population in the United States. This invasive species of fungus was likely introduced to North America by spelunkers or casual visitors who had previously visited caves or bat hibernacula in Europe or Asia and may have unwittingly carried spores on their clothing or gear. The fungus was discovered in a cave in New York state in 2006 and has since spread through much of the contiguous US, likely via people, bat to bat contact and other environmental factors.

Pd is a “cold loving” fungus, which achieves its maximum rate of growth within temperatures of 1° to 15° C, the body temperature of North American hibernating bats falls well within this range. This fungus begins by colonizing the skin of hibernating bats while their immune responses are diminished during hibernation. It erodes and replaces portions of the inner and outer skin layers including all functional structures like muscle, glands, hair follicles, blood vessels and connective tissue. All of this ultimately results in interrupted hibernation, the rapid use of stored energy, tissue death, dehydration, erratic behavior and often, death.

WNS has affected 12 North American Bat Species and has been detected in several others. Bat species that are the most greatly affected tend to hibernate in large groups in caves, like the Indiana bat, little brown bat and northern long eared bat. To this day, the fungus has killed millions of bats, and in some cases entire hibernation sites have been wiped out.

There is no current cure for WNS in bats, but scientists and groups across the world are studying its effects and searching for a solution. In the meantime, this epidemic has opened the eyes of the public about how important it is to protect the species that dwell, even occasionally in the delicate web of caves and mines that dot the country. These ecosystems are more unique and vulnerable than people understand – and it is so important for visitors to these places to prepare accordingly, for their own health and safety and for the preservation of the biodiversity that enriches these places.

For more information about WNS and what you can do to help, check out the resources below!