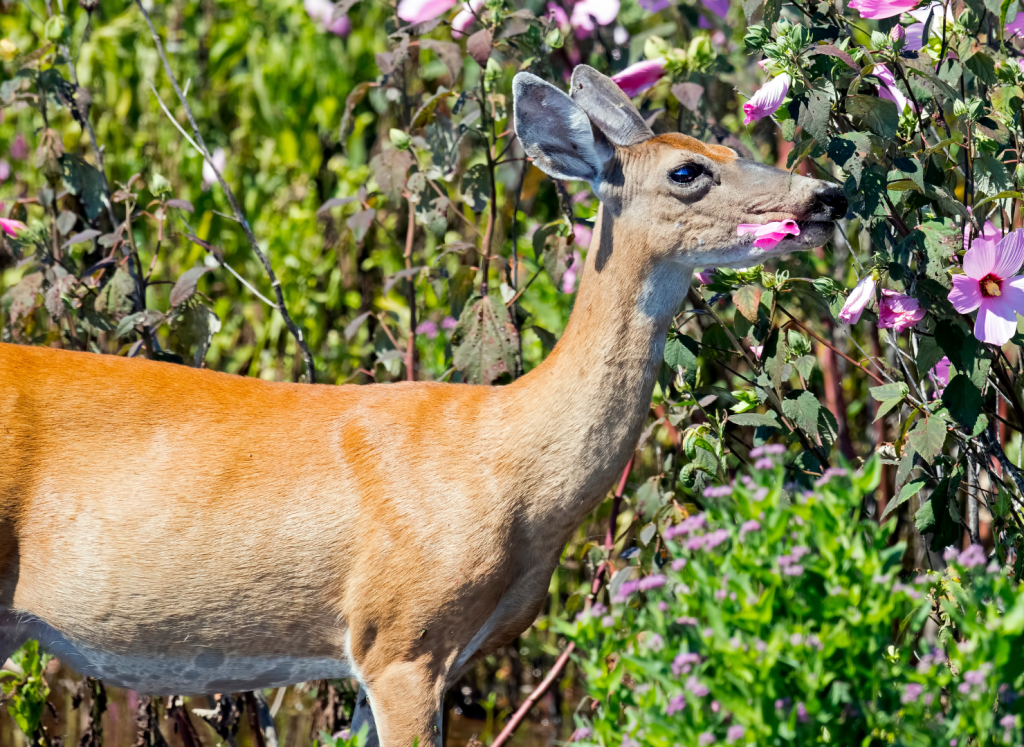 A deer chowing down on some Rose of Sharon. Brian E Kushner Getty Images via Canva

White tailed deer are common across the entirety of the United States, except for Utah, California, and Nevada and have an estimated nationwide population of 30 million! These adaptable mammals are found in a variety of habitats like forests, mountains, farms, islands and suburban backyards. In the summer they feed on green vegetation and any gardener knows that backyard flowers and produce are fair game for a hungry deer. In the fall their diet shifts to acorns, corn, grasses, and leaves, but as the weather grows colder their diet shifts almost entirely to woody browse and twigs.

Male deer can weigh up to 300 pounds, while female deer tend to be smaller. Only male deer typically grow antlers (very rarely a female does!), which develop and shed in annual cycle that begins in the summer and ends in the winter. These incredible mammals can run up to 40 miles per hour, jump over 8 feet, and are even able to swim. A perfect example of their swimming ability is the diminutive Key Deer, found in the lower Florida Keys. (1)

Like some other herbivorous mammals, deer have four stomachs to aid in the digestion of their cellulose rich food sources. An average white tailed deer requires between 5 to 7 pounds of food per day! Deer will often stand on their hindlegs to reach a desirable food source. In areas with an overabundant deer population, you may even notice that leaves and small branches are missing from anywhere below 6 feet on trees, a tree damaging phenomenon known as a browse line. Deer target saplings and new growth which may also impact the numbers of certain trees and shrubs in our region, like sugar maple and yellow birch. 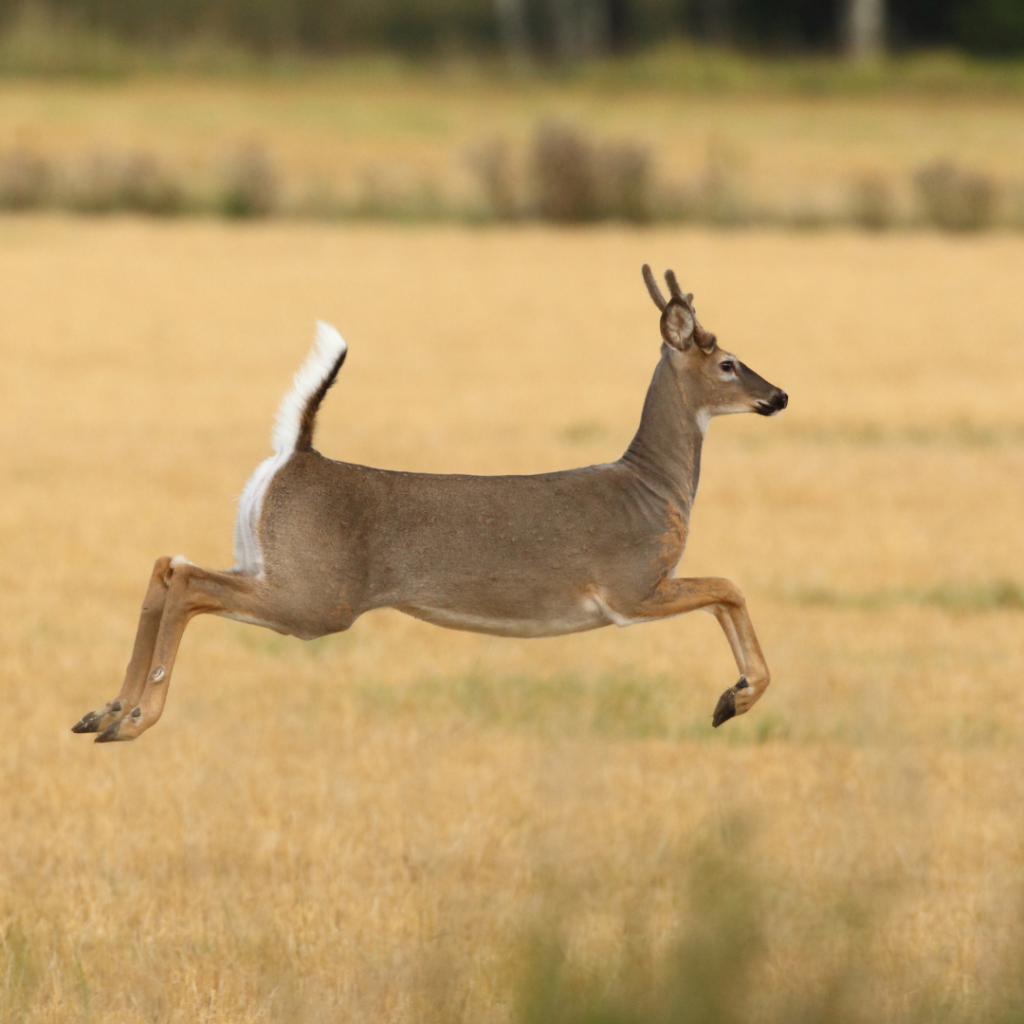 A deer leaping through a field. C. Paolo Manzi, Getty Images via Canva

Their breeding season or rut has just passed its zenith but will continue into early winter. During this time, deer are especially active and motorists should take extra caution when driving at night in areas with abundant deer populations.

Deer have different summer and winter ranges, and will return to the same territories year after year. During the summer, social groups consist of females, fawns and yearlings that are related to one another and any adult males who share the territory. In the winter, a complex social structure which dictates dominance according to size and age becomes more evident. Large males are dominant and receive the best food sources, followed by adult females, yearlings and fawns.

(1) This subspecies of the white tailed deer was isolated thousands of years ago by rising water levels, and as a result has undergone a phenomenon known as “island dwarfing”. Males of this species weigh ~75 pounds maximum and are about two feet at the shoulder. 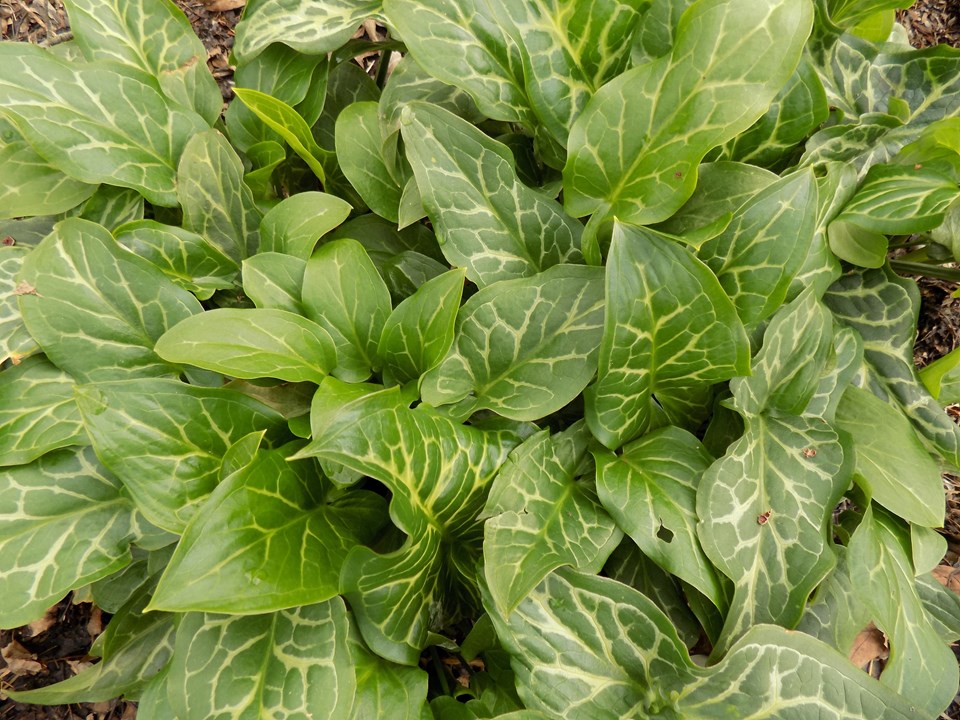 Italian arum is an evergreen perennial native to the Mediterranean. It has been favored as an ornamental planting in the USA because of its hardy nature, and the pop of color it provides in gardens during the winter months. Italian arum grows to about 12-18” tall during the fall and goes dormant during the summer until the autumn kickstarts their growth cycle again. In the Hudson Valley the average temperature will determine whether these plants lose their leaves during the winter. Plants that lose their leaves over the winter will sprout an additional set in the spring. 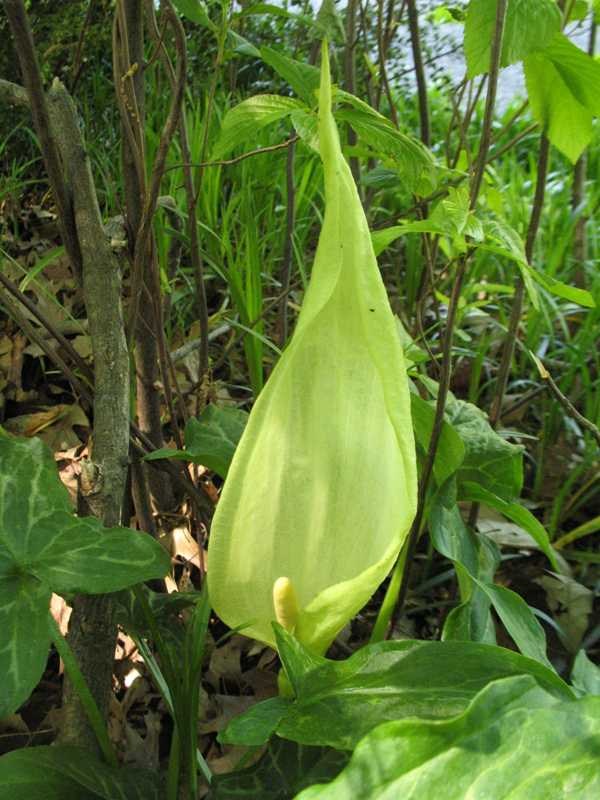 Their flowers, which strongly resemble a “Jack in the Pulpit” bloom in the late spring. The flowers consist of a spadix, a tubular structure covered in small white flowers, surrounded by a spathe, a leaf like structure that encloses the spadix like a hood. For returning readers of this series, you may notice that the flower also resembles that of the native skunk cabbage. The three plants all belong to the family Araceae and the flowers of the Italian species produce heat just like their native cousin. However, because their flowers bloom late in the spring, you won’t be able to identify them in the winter by the circle of melted snow surrounding the spathe (a trademark of skunk cabbage). You may wonder, If they don’t bloom during the winter, then why produce their own heat source? This particular trait enhances the scent of the flower, an odor which has been described as resembling “stale urine” and “rotting meat” in order to attract their preferred pollinators, flies. A lovely addition to the garden! 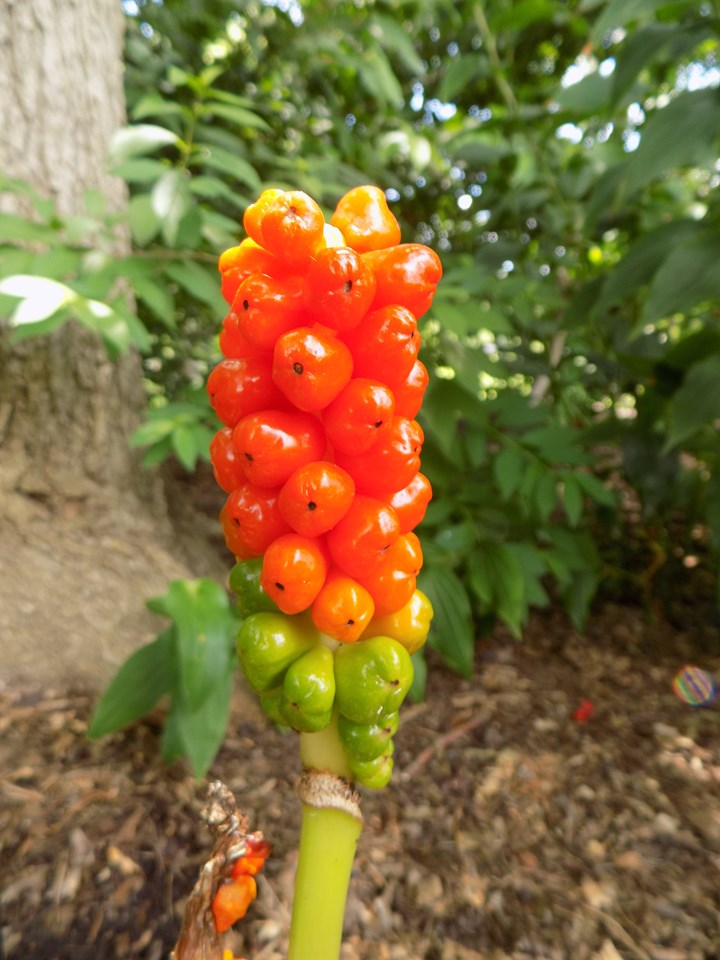 As is often the case when it comes to non-native potentially invasive plants, Italian arum is hardy, is a prolific reproducer and tends to grow in dense clusters. The seeds of this plant are distributed by birds (the berries are toxic to mammals), but they also reproduce via the shedding of “bulb-lets” these bulbs can remain viable in the soil long after the host plant has been removed. Dense stands of non-native plants are damaging to plant and animal diversity, but because this plant has only recently been marked as a potential invasive, little is known about the true effects it may have in our region.

The leaves and fruit of Italian arum are highly toxic to mammals and may cause skin irritation in humans.

For more information about this plant, see the resource list below. If you spot one, be sure to report it on IMapInvasives!