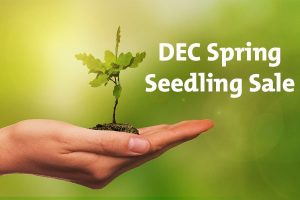 January is the time to order tree and shrub seedlings from the DEC’s Saratoga Tree Nursery. The nursery offers bare-root seedlings for as little as $1 each. These inexpensive plants are advertised as 5” to 14” tall. Some plants are actually much taller and quite a bargain. Ordering starts January 3rd and continues to May 12th for the 2023 season. It’s best to order early because supplies are limited and some species may be sold out by mid-January.

Some interesting historical information about the DEC’s Nursery:

The Colonel William F. Fox Memorial Saratoga Tree Nursery in Saratoga is the oldest state forest tree nursery in the country. When DEC established the Nursery program in 1902, the original priority was reforestation. Reckless logging and forest fires had left bare slopes that were losing soil to erosion, contributing to serious flooding problems and contaminating water supplies. The present Nursery in Saratoga was established in 1911 as one of several State Nurseries across New York. In the decades before World War II, the primary mission of the Nursery was to grow conifer seedlings for water supply protection, soil protection and for timber plantations to ensure a steady supply of lumber.

In the early 1930s the State began the reforestation system by acquiring abandoned farms. Most of this land had to be planted to protect the soil. Nursery production rose to meet the demand, and peaked in 1938 at 72.8 million seedlings produced for planting just in that year. These plantings were mainly accomplished by the Civilian Conservation Corps (CCC).

With the establishment of the Department of Environmental Conservation in 1970, which combined Natural Resources and Environmental Quality in one department, the Nursery’s mission became more diverse. Along with traditional forest seedling production and wildlife shrubs, the Nursery also began to produce trees and shrubs for remediation, wetland restoration, riparian protection, with a focus on growing native species from local seed sources. Over the past hundred years, the Nursery has adapted to the changing needs of forestry and land management practices. The Nursery is an essential part of DEC that embodies the goals and mission in the form of living plants that support the multiple goals and missions of DEC. Since the inception of New York’s nursery program in 1902, more than 1.6 billion tree and shrub seedlings have been produced by the State.

For more information about the Wallkill Valley Pollinator Pathway and how to join, visit:

Joining the pathway is easy—just start doing these three things: